Don't tie one on! 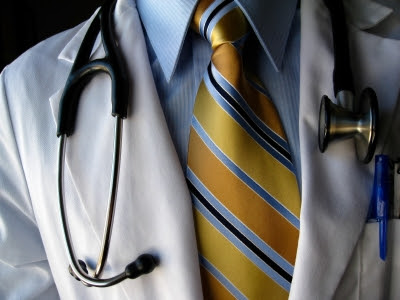 A new study in the Journal of Hospital Infection seeks to shed some light on an area of true controversy in infection prevention: whether clothing is involved in the transmission of organisms between providers and patients. The party line thinking in the infection prevention world goes something like this: infrequently laundered white coats and neckties do not transmit pathogens to patients, but if a patient is infected or colonized with MRSA, VRE or MDR-gram negative organisms wear a plastic gown when you enter his room. I have yet to have anyone explain to me the logic behind this paradoxical thinking. In my simple mind, clothing either has the potential to transmit pathogens or it does not. If it does, then minimize that risk. Shedding white coats, ties and long sleeves makes sense to me. The real question, I believe, is not whether infections are reduced by these simple interventions, but to what degree.

In the JHI study, a physician simulated a physical exam on a mannequin. The physician wore 4 different combinations of shirts and neckties (short sleeved shirt, long sleeved shirt, with tie, without tie). Prior to each simulated physical exam, specified areas of the shirts and ties were inoculated with Micrococcus luteus. After the exam, the mannequin was then cultured for the presence of Micrococcus. Each clothing combo experiment was repeated 5 times.

The clothing combo resulting in the highest rate of mannequin contamination was long sleeves + tie (transmission occurred in 4/5 experiments) and lowest with short sleeves sans tie (0/5). Looking at each item separately, long sleeved shirts were associated with more frequent transmission than short sleeved (5/10 vs 2/10), and ties more frequently than no ties (6/10 vs 1/10). Based on the application of a statistical test to the proportions shown above, the investigators concluded that ties increased the risk of transmission of bacteria, but long sleeves did not. Given that there were only 20 experiments I don't think we can draw many conclusions here, except that it's another study which adds to the biologic plausibility that clothing may be involved in transmission of pathogens in the hospital. As a guy who still follows the bare-below-the-elbow approach (i.e., what follows may reflect my bias), I find it intriguing that the only clothing combo in which no transmission occurred was short sleeves + no tie. Aren't we still trying to get to zero?