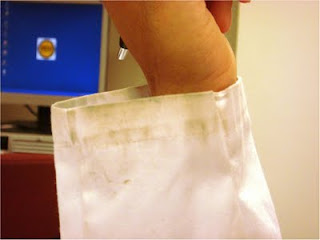 Over the past few years, I've become interested in the role of clothing in infection control and how clothing affects patients' perceptions of doctors. Two new studies in the Journal of Hospital Infection examine these topics. In the first study by C.L. Shelton et al, 100 inpatients in the UK were asked to rate the appropriateness of physician attire by examining photographs of mannequins dressed in various ways (e.g., suit and tie, dress clothes with tie but no white coat, dress clothes and tie with white coat, scrubs, jeans). No significant differences were noted except that patients did not believe that jeans were appropriate. The participants were then read the following:  "Scientific studies have shown that disease-causing bacteria can survive on items of clothing. Those items which are particularly prone to carrying bacteria include ties and long-sleeved clothes, as they frequently come into contact with patients." The patients were then asked to repeat their evaluation of attire. Scrubs were then significantly preferred over all types of formal attire.

In the second study by S. Palazzo and D.B. Hocken, 75 inpatients in the UK were surveyed regarding their preferences for physician attire. In this study, there was no educational intervention about clothing and infection control. However, 73% of patients preferred that doctors not wear a necktie and 59% preferred that doctors not wear a white coat. Scrubs were deemed appropriate attire by 83% of respondents. Interestingly, in both studies patients stated that they wanted to be able to identify doctors by their dress.

So what's the take home message? Patients get it--they want what is safest. As I have argued before, the white coat is much more about the doctor than the patient.