My new favorite study.  Researchers at Northwestern University explored the impact that clothes have on our thinking processes. Specifically, they looked at the impact that wearing a lab coat has on attention-related tasks.  While it is well documented that what one wears impacts the perceptions and reactions of others (See Molloy's new Dress for Success), less research has been completed on the impact clothes have on the wearers themselves.

In three related randomized trials, Adam and Galinsky explored the science of "enclothed cognition" which suggests that people are influenced by (a) physically wearing specific clothes and (b) the symbolic meaning of the clothes.

In the first study they randomized 58 students to randomly wear a lab coat or their street clothes.  Subjects were then given the Stroop task where they had to quickly state whether a string of letters were colored red or blue with some incongruent trials thrown in with the word "RED" written in blue and "BLUE" written in red. While each group took the same amount of time to complete the tasks, the subjects wearing lab coats made half as many errors on the incongruent trials. Thus, it appears that wearing a lab coat improved selective attention.

In the second (N=74) and third studies (N=99), they investigators explored the impact of the clothes "meaning."  They divided the cohort into three random groups: (1) wearing a "doctor's" lab coat; (2) wearing a painter's lab coat and (3) seeing or identifying with a doctor's lab coat. The outcome they tested was sustained cognition by showing subjects identical photos except for four minor differences and asking them to find the four differences. Test yourself using the photo below while wearing and not wearing your white coat. (You can click to enlarge the photos) 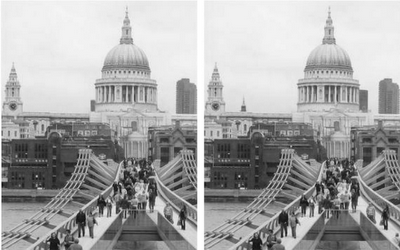 The results were very interesting. The subjects in a doctor's coat found 20-30% more differences in the pictures than subjects in a painter's coat. Thus, wearing a lab coat improves sustained attention but only if it is a certain kind of lab coat - namely a doctor's white coat - the meaning of the coat matters.

So where does this leave us?  First, I would want to see how persistent this effect is. Does the effect wear off very quickly after the "white coat ceremony"?  Does it work immediately after you put on the white coat but then work less effectively by the end of rounds?  Of course, does it have to be a "doctor's coat" in particular or can we slowly wean clinicians off their white coat addiction while maintaining the cognitive benefits with a creative replacement, say, a doctor's cummerbund?