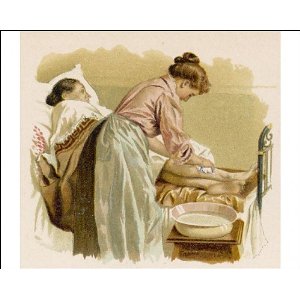 There's a new paper in the American Journal of Medicine by Marisa Montecalvo's group on chlorhexidine bathing in ICUs. In this quasi-experimental study, 6 ICUs in 5 hospitals implemented daily bathing of adult ICU patients with chlorhexidine. The outcome of interest was central line associated bloodstream infections. Compared to the pre-intervention period, there was a nearly 60% reduction in CLABSIs. So here's another study that supports the utility of chlorhexidine bathing to reduce healthcare associated infections.

At my hospital, we like it so much that in addition to bathing ICU patients with chlorhexidine, we are now bathing ward patients who have devices with it, and we're expanding chlorhexidine pre-operative bathing to more types of surgical procedures.
Email Post
Labels: chlorhexidine