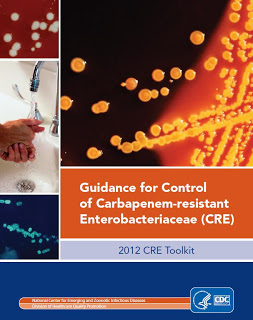 Why is it that the DOD can ask for more money to fight their wars but CDC can't?  It seems to me that the fight against resistant bacteria is a war! - enp

I was interviewed by Peter Eisler of USA Today about a month ago concerning the recent NIH KPC Outbreak. His investigative report on carbapenem-resistant Enterobacteriaceae (CRE) was just published today and I found it a very good read.  The report centers around a CRE outbreak that began four years ago at the University of Virginia Medical Center and continues there to this day. The article is particularly interesting when you focus on the quotes from all of the other HAI-prevention folks in the article.  However, I also thought as I was reading it, what would Dan and Mike have highlighted if they'd posted on this same article?

I suspect that Dan would have wanted to highlight how difficult infection control becomes when gene/plasmids cross species during outbreaks and how this strongly impacts case definitions as you investigate. He might also point out how this limits the utility of whole genome sequencing, since the plasmids merrily skip from one species to another.  I think that Mike might have pointed out that the vertical control barriers, like nasal PCR, set up to prevent MRSA transmission are not very effective at preventing the spread of non-MRSA pathogens like CRE. He might suggest that a continuous and relentless focus on horizontal measures, like hand-hygiene, would be most effective.  Dan and Mike would both have been correct, but I have a different take...

My take is that CDC is on the wrong side of this debate and this has me very worried. Now, I don't remember exactly what was said about HIV during the 1980s, but I suspect there was a realization that something needed to be done and that significant investments would need to be made in its treatment and control. I'm not suggesting that CDC should flame fires of panic, but I wonder how long we can rely on the same old, largely ineffective, tools for outbreak control - patient isolation, subpar environmental control, inadequate hand-hygiene improvement bundles, lack of effective and novel antimicrobials - before CDC asks for help...and more funding.

So here are some select quotes from the article with my concerns bolded:

"We're working with state health departments to try to figure out how big a problem this is," says the CDC's Srinivasan, noting that his agency can pool whatever incidence data states collect. "We're still at a point where we can stop this thing. You can never eradicate CRE, but we can prevent the spread. ... It's a matter of summoning the will."

The rest of us:

"In the Chicago area, where scores of CRE infections have been found since 2008, studies show that about 3% of hospital patients in intensive care carry the bacteria, says Mary Hayden, director of clinical microbiology and an infectious-disease doctor at Rush University Medical Center. Those same studies have found CREs being carried by about 30% of patients in long-term care facilities." "We have to think about a new approach, a regional approach, to controlling these organisms, because … no facility is an island," Hayden says.

"My concern is that there aren't a lot of methods in our tool kit that are significantly effective in curbing the spread of these infections," says Eli Perencevich, a professor and infectious-disease doctor at the University of Iowa's Carver College of Medicine. If unchecked, "these (bacteria) are going to greatly impact the kind of surgeries (and) treatments we can have," Perencevich says. "We're entering the post-antibiotic era; that's a very big problem."

"If you look at the current pipeline of antibiotics (in development) … none of them really is going to be active against these bacteria," says Gary Roselle, director of the Infectious Diseases Service for the Department of Veterans Affairs health care system. "The reality is, (CRE infections) are remarkably difficult to treat, they often have bad outcomes … and they're increasing nationally," adds Roselle. "I'm assuming this is going to get worse, and there likely won't be new antibiotics to treat it in the near future, so the focus has to be on prevention."

"So even if I had a perfect program to stop all patient-to-patient transmission in the hospital, the maximum impact I could have would be a 60% reduction in prevalence," says Brian Currie, the hospital's vice president for research and an assistant dean at the affiliated Albert Einstein College of Medicine.

"We have continued to have patients with CREs that are related to this (first) event," Costi Sifri, the hospital epidemiologist at UVA, says. "We haven't been able to close the door on this. ... I'm not sure you ever can."