MRSA rates continue to decline, but not in the community

About three years ago, Alex Kallen and colleagues published a study in JAMA describing the epidemiology of in invasive MRSA infections in the US from 2005 to 2008.  Dan and I wrote the accompanying editorial and said that "The most important finding of (Kallen's) study was documentation of a continuous decline of invasive MRSA disease, including an estimated 9.4% annual decrease in hospital onset and an estimated 5.7% annual decrease in health care–associated community-onset infections." At that time, community-associated infections were increasing. 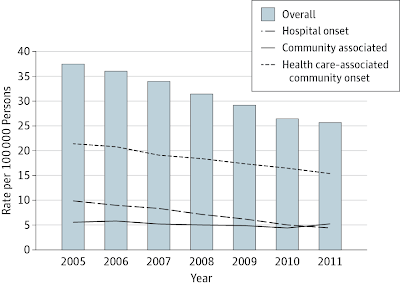 Fast forward to 2013 and today's JAMA-Internal Medicine. Raymund Dantes and colleagues at the CDC have updated the results and now include data from 2005 to 2011. Using somewhat different methods, they report that there were around 80,000 invasive MRSA infections in 2011, which is 31% lower than 2005 estimates. Importantly, for the first time, the incidence of hospital-onset infections was LOWER than community-associated (no healthcare exposure) rates. Of all healthcare-associated infections, 77% were classified as healthcare associated community-onset or HACO. The continued declines in hospital onset and to a lesser extent HACO MRSA infections suggests that infection control methods including attention to hand hygiene and prevention bundles must be having a positive effect. Estimated deaths attributable to MRSA fell to 11,000.

However, minimal changes in true community-associated infections (a reported 5% decline) suggest that there is much more work to do preventing MRSA in the community. Unfortunately, we don't have evidence-based methods available to prevent community infections, so the lack of community declines is not surprising. I hope we begin to invest in HAI prevention research with a focus on non-acute care populations.