We're in the post-antibiotic age 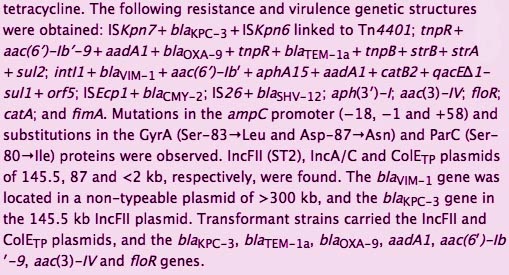 We're so very lucky to have lived in the "age of antibiotics."  However, most of us were neither alive nor cognizant prior to 1943, so we don't have a concept of the morbidity and mortality prevented by antibiotics. In some regards, this pre-1943 period is the future we're facing.  Author and science journalist Maryn McKenna has a wonderful article up on medium.com where she discusses this post-antibiotic past and future using a touching story of her great uncle along with facts such as "one out of every six recipients of new hip joints would die" without antibiotics. She also discussed this article on yesterday's CBC "Sunday Edition" radio broadcast (audio available here).

As if we need other things to add to our phobia lists, there's a new case-report published in JAC last Friday of an elderly Spanish woman with chronic renal disease and recurrent UTIs. She initially presented with pyelonephritis caused by a susceptible E coli. However, after 1 week of therapy she developed sepsis and renal failure that was unresponsive to meropenem and died. MDR E Coli was isolated, which was resistant to all tested antibiotics except fosfomycin, tigecycline and tetracycline. Further analysis identified numerous resistance and virulence genes (see figure above). Importantly, the authors state that this is "the first report of the co-production of KPC-3, VIM-1, SHV-12, OXA-9 and CMY-2 in a unique clinical multiresistant E. coli isolate."