As I mentioned yesterday, it's really hard to write a post when you've already written the accompanying editorial. Today, I have a taller task - posting on a study led by two close colleagues (and favorite people), Marin Schweizer and Loreen Herwaldt. (COI alert) Fortunately, JAMA Associate Editor, Preeti Malani, has done the heavy lifting with her excellent editorial.

In today's JAMA, Schweizer and colleagues reported the results of an AHRQ-funded trial examining the benefits of an SSI prevention bundle in orthopedic and cardiac surgery. The bundle was outlined in a meta-analysis they published in BMJ two years ago and included preoperative nasal screening for MRSA/MSSA, mupirocin BID and daily CHG baths for 5 days if screen positive and vancomycin added to perioperative prophylaxis if MRSA positive. The quasi-experimental intervention study took place in 20 US hospitals across 9 states with 39 months of pre-intervention SSI rates and 21 months of rates collected during the intervention period.

Overall, the results are impressive (i.e. not modest). First, there was a 42% reduction in SSIs after the intervention was implemented (see Figure, below), despite modest bundle adherence (39% full adherence, 44% partial adherence). 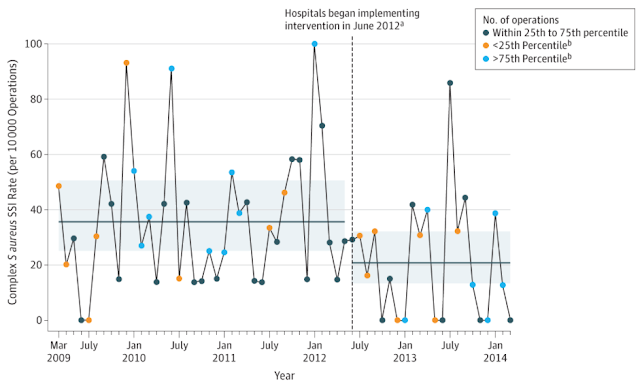 The key finding for me relates to the number of months where there were ZERO SSIs across all 20 hospitals. Looking at the Figure above, you can see that "the number of months without any complex S aureus SSIs increased from 2 of 39 months (5.1%) to 8 of 22 months (36.4%; P = .006 by Fisher exact test)." Seven times as many zero-months in all 20 hospitals. That's not a modest finding. ;)

Key points from the editorial:

"inclusion of patients undergoing emergency or urgent operations, a population recognized as at high risk for SSI, improves the generalizability of the findings."

"the primary study outcome was limited to complex S aureus SSIs, eliminating much of the subjectivity of infection surveillance. Even though surveillance practices varied among participating hospitals, complicated S aureus SSIs are not clinically subtle and can be identified easily by any surveillance system."

and given the modest adherence to the bundle, "Moving forward, efforts to promote and maintain adherence to prevention protocols will remain important"

"The study’s setting is among its limitations. All 20 study sites were from a single health care system with a well-established quality improvement infrastructure - certain factors in this health care system may differ from other clinical settings, including a below-average baseline infection rate. It remains unclear what challenges and barriers may present as this bundle is implemented at other institutions. Further studies in different settings will offer additional guidance."

and my favorite quote:"Although getting to zero is unlikely to be achievable, efforts that move closer to this elusive goal hold tremendous value for clinicians, hospitals, payers, and, most importantly, patients."

My final thoughts:
This is a wonderful study that took many years of planning, hard work and tremendous collaborators, including HCA and Ed Septimus. Congrats to all involved. Not every study is a grand slam, but we'll take a home run for infection prevention.