We need to rethink professionalism 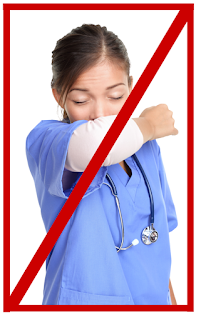 A new study in JAMA Pediatrics (free full text here) should make hospital epidemiologists and infection preventionists cringe. All physicians and advanced practice providers at Children's Hospital of Philadelphia were sent a survey on presenteeism. Of the 929 providers surveyed, 58% responded.

The big findings were as follows:

What I find most interesting about this paper is not how often sick healthcare workers come to work (though it's a big problem), but why they do so. And once again, professionalism rears its ugly head. Professionalism revolves around expectations and norms set by the profession. It seems to me that if we viewed this more through the lens of humanism rather than professionalism, we'd be better off. From a humanistic standpoint, which holds a universal rather than parochial view, all would agree that individuals who are ill with potentially contagious diseases should not come to work (doesn't matter whether you're a doctor, a teacher or a plumber). Similarly, in the white coat debate, professionalism drives the argument that physicians should wear a white coat. Humanism would dictate that attire should be practical, comfortable, safe, and personally desirable. Several years ago, Judah Goldberg wrote a great essay in Academic Medicine that I often quote and recently re-read on the conflict between humanism and professionalism. It really crystallized for me the differences between the two philosophies, which are often in conflict, and once the differences are made clear, it's easy to see the corrupting influence of professionalism. It's worth a read.
Email Post
Labels: presenteeism professionalism white coats