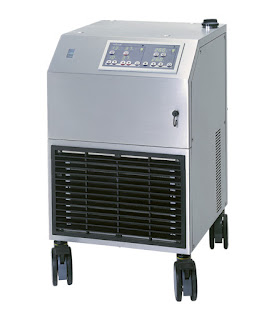 Dan and I have spent numerous hours recently on a particularly difficult infection prevention issue. We recently learned that a patient who underwent cardiothoracic surgery at our hospital developed an infection due to Mycobacterium chimaera. Last year, it was recognized that this organism is associated with heater-cooler devices used in cardiac surgery, and CDC and FDA put out alerts to hospitals in October 2015 regarding appropriate disinfection of these devices.

A paper in Clinical Infectious Diseases last year described an outbreak of these infections in Switzerland. The outbreak investigators determined that the water used in the heater-coolers became contaminated by M. chimaera. This water never comes into physical contact with the patient, but the investigators found that a fan on the heater-cooler unit aerosolized the organism into the air leading to direct contamination of the surgical wound. When the heater-cooler devices were present in the operating room but not turned on, the organism was not aerosolized.

Most of the reported cases have manifested as prosthetic valve endocarditis or vascular graft infections, and there may be involvement of the bone marrow causing cytopenias, as well as splenomegaly. The patients were not immunosuppressed. Often these patients presented with nonlocalizing symptoms, such as fever, mylagias, arthralgias, fatigue and weight loss. The mortality rate is approximately 50%.

Several issues make case finding problematic:
For the reasons above, on the basis of a single case, we have embarked on a four-year look-back of 1,500 patients who underwent procedures utilizing cardiopulmonary bypass at our hospital. These patients are being instructed to call a toll-free number to be screened for symptoms that may be related, and then to undergo further evaluation if needed.

If your hospital performs procedures requiring cardiopulmonary bypass, the most important control measure to prevent infection is to move the heater-cooler devices out of the operating room. Our engineers were able to develop a solution and accomplish this within 24 hours. In addition, ensure that the devices are being disinfected according to manufacturers’ guidelines.

M. chimaera is one of 8 species in the M. avium complex, and was recognized as a a distinct species in 2004. Given the ubiquitous nature of nontuberculous mycobacteria, we suspect that the cases linked to heater-cooler devices reported to date represent only the tip of the iceberg, and it is likely that more hospitals will be facing extensive look-back investigations.


Links to key references are below: