A: Maybe, but only with extreme caution after adjusting for the influence of policy changes

One of the topics that our group at the University of Iowa is very interested in is the use of administrative databases for tracking the epidemiology of healthcare-associated infections, including those caused by resistant pathogens. Marin Schweitzer reported (open access) in 2011 that the ICD-9 code V09, which was commonly used for tracking MRSA trends, was a poor predictor of actual MRSA infection. More recently, Michi Goto completed a systematic review (free full text) that determined the accuracy of administrative data for surveillance of CAUTI, Clostridium difficile infection (CDI), CLABSI, VAP/VAE, postprocedure pneumonia, MRSA, and surgical site infections (SSIs). He found that administrative data detected CDI and SSI with moderate sensitivity and high specificity. For all other conditions, ICD-9 based algorithms had limited accuracy and utility.

Which brings us to a condition that we haven't much explored - sepsis. Sepsis has been in the news lately, since the Third International Consensus Definitions of Sepsis and Septic Shock (Sepsis-3) were published in February. I've included an image of a monument to a different Third International above for historical purposes. We would expect that these new definition might alter the incidence of sepsis as measured using administrative databases - but only time will tell.

Fortunately, Shruti Gohil and colleagues working with the CDC Prevention Epicenter program just published (free text in CID) an important evaluation of how previous changes in sepsis coding criteria, definitions and reimbursement might have altered sepsis rates. Using retrospective data (2000-2010) from California they determine the association between the release of CMS guidelines of sepsis coding in October 2003 along with the introduction in the MS-DRG reimbursement changes  for sepsis care in October 2007 and sepsis incidence. I've included two figures that showed (A) the change in incidence after each CMS change and (D) mortality per 1000 cases over the same period. 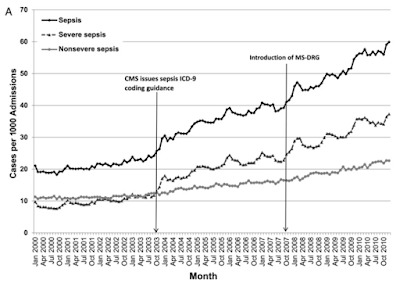 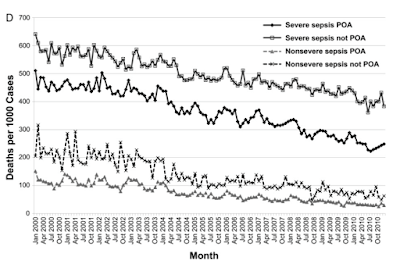 As appears obvious in the top figure, the marked increase in sepsis incidence, 3.6 fold over the study period, is temporally associated changes in CMS coding guidance and reimbursement. And fortunately, mortality appears to be decreasing. The authors suggest that some up-capture of less severely ill septic patients may be driving these findings. They also posit that background increases in sepsis, separate from those associated with CMS changes, could be driven by early recognition programs, such as Surviving Sepsis Campaign (2004), and improved diagnosis. The most important conclusion is this: "it is imperative that reported sepsis rates based on administrative data account for policy-related effects...interpretation of recent epidemiologic trends in sepsis based on administrative data should be approached with caution."