The debate regarding the effect of CMS's 2008 policy denying incremental payment for 8 complications of hospital care, also known as never events, is ongoing. Some studies have identified reductions in CLABSI and CAUTI after the policy was implemented, while others failed to find reductions in CLABSI, CAUTI or VAP, using a different dataset and methodology.  The impact of the nonpayment policy change on orthopedic procedures is less well studied.

Authors Jereen Kwong and colleagues published a study in the July ICHE that examined the effect of the policy on SSI following spine fusion, shoulder and elbow arthrodesis and repair, and spinal refusion procedures, but not hip and knee replacements (since they aren't covered under the policy). To determine the impact, they analyzed 20% of all inpatient discharges among patients ages 60 to 80yo using the HCUP National Inpatient Sample from 2000 to 2013. This is an all-payer sample in that it covers patients where Medicare is the primary payer but also non-Medicare populations.

The authors' primary hypothesis was that if the CMS policy had an impact, we would see larger reductions in SSI rates among Medicare vs control, non-Medicare patients. You can probably sense my concern immediately. How would bundles implemented to reduce SSI only have an effect on Medicare patients? It is unlikely that infection preventionists or clinicians would even have knowledge of their payor status. If non-Medicare controls have had the same exposure, they can't be used as controls!

Without getting into the methods details, the authors were expecting larger changes in SSI rates in the Medicare vs non-Medicare populations and they didn't find significant differences RR=0.9, 95% CI 0.8-1.1)  Looking at their Figure 1 below, we can see that SSI rates were slightly higher in Medicare populations (dashed line) vs non-Medicare populations before and after the non-payment policy went into effect. If I were to do this analysis, I would have looked for a change in intercept and/or slope in the SSI rates before vs after the policy combining both payor populations. Looking at the figure, there doesn't seem to be much change after the policy went into effect in either group. So we can agree with the authors that the policy had limited or no impact on SSI rates, but not for the reasons the authors state.

On the positive side, SSI rates have been declining over the entire 14-year study period - so surgeons and infection prevention folks can pat themselves on the back. Keep on doing whatever you've been doing! 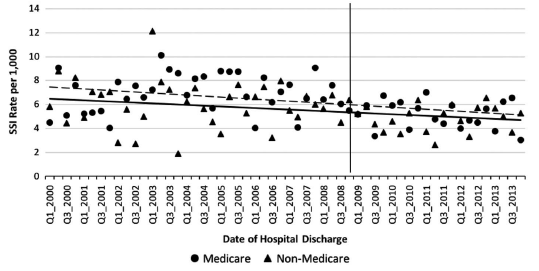