When the US opioid epidemic causes a Serratia outbreak 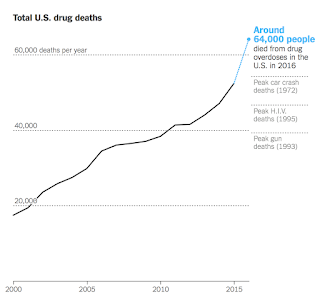 We are in the midst of an almost unprecedented opioid epidemic in the U.S.  Last year (2016), overdoses caused 64,000 deaths, which was a 22% increase from the previous year, while fentanyl-associated deaths increased by 540% over the past three years. (I wanted to add a thousand exclamation points after the 540, but thought better of it)

Fifteen years ago, Belinda Ostrowsky reported a 26-patient outbreak of S. marcescens bacteremia in a surgical ICU that was ultimately linked to contamination of fentanyl by a respiratory therapist who had diverted the narcotic for their own use. (The CDC has a nice webpage describing 30-years of HAIs associated with drug diversion by healthcare workers)

Given the current opioid epidemic, we should expect an increase in hospital outbreaks associated with narcotic diversion. So, it is not surprising to read about a five-patient cluster of S. marcescens bacteremia linked to narcotic diversion by a PACU nurse just described in ICHE by Nasia Safdar and colleagues at University of Wisconsin. Even before the Serratia cluster was identified, a nurse found hydromorphone and morphine PCA syringes with the tamper-evident caps no longer intact and drug levels undetectable in a locked automated medication dispensing cabinet. The subsequent investigation eventually found 42 syringes had been tampered with and narcotics replaced with saline or lactate ringers before the nurse was fired. Unfortunately, even though the outbreak was clonal, the tampered syringes were destroyed before they could be cultured. However, four patients were epi-linked to the PACU nurse and the fifth patient was the nurse's father. (I resisted adding an exclamation point here too)

There you have it, but if you want to read beyond the ICHE report, there is an interview of Dr. Safdar over at STAT. We certainly don't need more things to worry about with the current opioid epidemic, but we should all make sure we keep talking with our pharmacy colleagues about narcotic thefts and keeping our theft policies and prevention practices up to date.