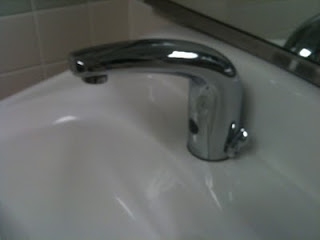 I hope everyone enjoyed SHEA.  Overall, a good meeting with good weather and good science.  I pinch-hit as a moderator for a hand-hygiene session on Saturday.  The original moderator (i.e. Mike Edmond, have you heard of him??) was scheduled to moderate two sessions at the same time and for some reason wasn't able to pull it off.  ;)
There were interesting studies presented in the session including an abstract highlighting iScrub, which Dan has mentioned before.  One particular abstract garnered a lot of press attention - I'm not used to hearing about data in the morning newspaper before the abstract is presented, for example. The study was conducted by Emily Snydor, Lisa Maragakis and colleagues at Johns Hopkins Hospital and aimed to determine the safety of touchless water faucets in their hospital.  They compared 20 newly installed automatic faucets with 20 old standard faucets and found that 50% of the automatic faucets had 15% of standard faucets were contaminated with Legionella. After chlorine dioxide, 29% of the automatic faucets and 7% of standard faucets were still contaminated with Legionella.  Hopkins is now removing all of the automatic faucets from their facility.

Some thoughts: 1) It appears that Legionella is a problem in their system and the automatic faucets are only part of the problem.  Removing them isn't enough.  2) The faucets in the study were not installed at the same time since the automatic faucets were new and the standard faucets were likely years old - could biofilm play a role here?  3) Not all automatic faucets would be the same, perhaps different designs would have different risks.  4) What about other pathogens?  How do you balance lower risk of C. diff or acinetobacter with touchless faucets compared to Legionella?  5) Could the faucets be "reprogrammed" or designed to allow flow of the stagnant water prior to contact with the HCW hands?  This might reduce one benefit of these automatic faucets since they do save a lot of water.

What do you guys think? Is this enough data to ban automatic faucets in hospitals? My other concern is that this study will be misinterpreted and people will become afraid of automatic faucets in places such as airports.  I doubt the Legionella risk in airports outweighs the influenza risk, for example.