I love me some anaerobes!

The first case-control study I performed early in my hospital epidemiology fellowship at the University of Iowa was an examination of risk factors for VRE (vancomycin-resistant enterococcal) bloodstream infection in an outbreak among oncology and bone marrow transplant patients at a community hospital. Little was known about VRE at the time. One very strong risk factor emerged from my data: receiving an antibiotic that had significant activity against anaerobes. This 20-year old observation has since been replicated and subsequently proven in experimental animal models. In mice treated with anti-anaerobic drugs, VRE burden can rise to the point that these organisms constitute 99% of the bacteria in the gut. Although VRE are relatively nonvirulent organisms, in neutropenic hosts they can cause bloodstream infection following gut colonization and translocation across the intestinal mucosa. 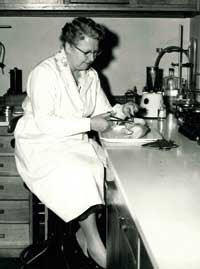 Now comes a very interesting study from Memorial Sloan Kettering Cancer Center in this month's Infection and Immunity. The investigators induced VRE colonization in mice, then performed fecal transplantation using stool from untreated, noncolonized mice. Within 15 days VRE could not be recovered from the feces of the treated mice. They next determined that the presence of the obligate anaerobe Barnesiella in donor stool was most closely associated with the therapeutic effect. They then evaluated stool cultures of patients who had undergone allogeneic stem cell transplants and found that those patients harboring Barnesiella in their GI tracts were protected from having VRE domination of their fecal flora.

The authors put their findings into an interesting evolutionary perspective in the paper's discussion:

"Oxygen-intolerant bacteria have limited options on the earth’s surface, and the metazoan colon represents an essential, and for many anaerobic species, sole, sanctuary. Despite their density in the colon and their proximity to the bloodstream, obligate anaerobes rarely cause human disease and their survival depends on their host’s survival. Obligate anaerobes of the gut promote their host’s survival by limiting the expansion of oxygen-tolerant bacteria, which, by and large, are the subset containing most of the intestinal pathogens. Our results suggest that Barnesiella spp., by restricting the growth of VRE, regulate the composition of the microbiota and optimize host survival."

I always teach the medical students that after they read a paper they should ask themselves to identify the implications of the paper for their practice. In this case, I suspect the implication is that my future is filled with performing many, many more fecal transplants. Although the yuk factor is very high, reimbursement is bad, and the time input is significant, the powerful results and grateful patients make doing it truly worthwhile.