KPC, CRE, MDR-GNR: Call 'em what you will, but call for a national response!

There is an early release MMWR out today describing the recent trends in carbapenem-resistant Enterobacteriaceae (CRE) using data from the CDC's National Healthcare Safety Network (NHSN) and the Surveillance Network–USA (TSN). CRE infections, such as UTIs or intra-abdominal infections, cannot be treated with currently available antibiotics. The results of the MMWR study are not surprising - there are more CRE now - yet I find them rather chilling.

What can we do about this? This is what they say in the abstract: "Interventions exist that could slow the dissemination of CRE. Health departments are well positioned to play a leading role in prevention efforts by assisting with surveillance, situational awareness, and coordinating prevention efforts."

However, the most important aspect of the Netherlands and Israel examples were that they instituted NATIONAL RESPONSES aimed at MRSA and CRE. There are no such national efforts here in the US targeting CRE. This is what we have in the US per the MMWR report: "six states have made CRE reportable, and three additional states are actively pursuing this option." This is not a national response. This is a national tragedy. We can't expect CDC to say they can't handle the problem and we can't expect states to say they can't handle the problem. They are working their butts off with minimal support and no national will for a coordinated response. If we don't have a national response soon - it will be too late, but I'm not holding my breath.

I will leave you with an excerpt outlining the Israeli national CRE response from Mitch Schwaber's excellent report in CID. Do you think we have anything close to this going on here in the US? Me neither. 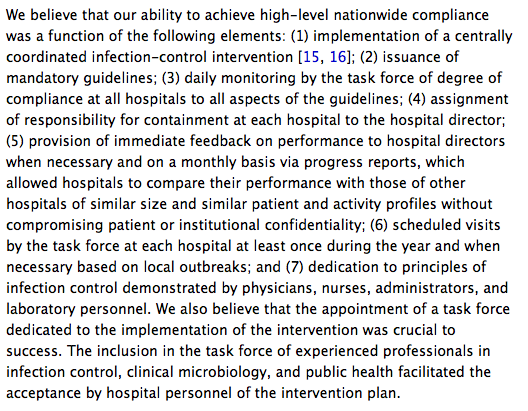