Skip to main content
Labels
Posted by Eli Perencevich May 13, 2013 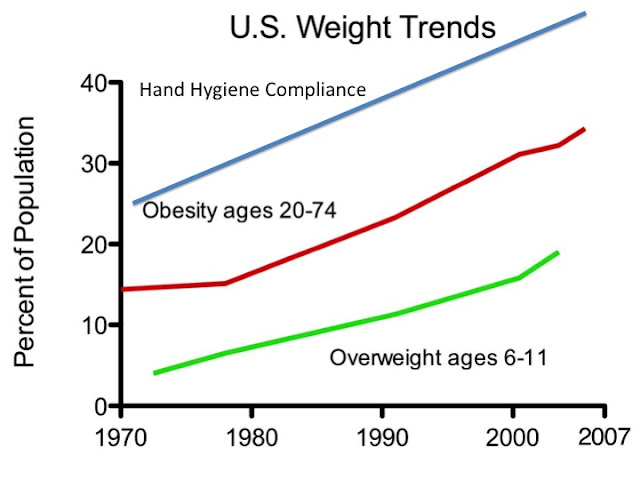 Subtitle: "Or how you can associate almost anything with a weak study design."

One of my favorite epidemiological study designs is the temporal association "ecological" study that attempts to infer causation by showing one exposure increasing and one outcome increasing and then implying that the exposure is causing the outcome. You know, "Hey, they are both going up so one thing causes another." Vaccine use and autism rates anyone?  So, just for fun I've produced the graph above and as you can see, through the efforts of CDC, WHO, VA and many individually hard-working IPs, hospital epidemiologists and clinicians hand hygiene compliance has increased. And as you can also see obesity is also increasing, ergo hand hygiene causes obesity!  Just try to disprove it!

Well, except that you can't conclude that from such a study design. For one, the author didn't have exposure and outcome from the same time periods. Why would we think average hand hygiene compliance over an entire year would correlate with monthly CDI rates and quarterly MRSA rates?  And how can we not consider other factors at play like the emergence of NAP1 or CA-MRSA during this period? Maybe there's even a Simpson's Paradox here, but that's a topic for another day. Oh, and keep washing your hands. I doubt we've reached a "threshold" of compliance!