Am I an indicator of a decline in hygiene? 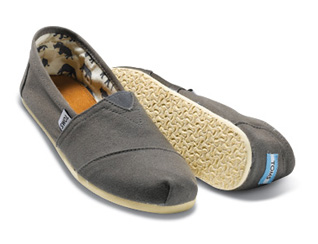 A few weeks ago I was seeing patients at a clinic in an affluent suburb. My first patient of the day was a professional woman. At the end of the encounter, she said: "Can I ask you a question?" I had no idea where this was going, sensing that this was probably not going to be a medical question, but said, "of course." She then proceeded to ask me how I liked my Toms, as she wanted to buy her husband a pair. I was in my typical summer clinic attire, which consists of a polo jersey, khakis, and Toms (no socks). Now I think Toms are great--they're comfortable, not made of leather (i.e., animal friendly), and for every pair sold a pair is given away to a child in need. But this post isn't really about Toms.

The Toms question from my patient was a great segue for me to ask the patient about doctor's clothing. I asked her what she thought about how I was dressed and her expectations of how physicians should dress. She said that she saw me walk into the clinic and knew I was her doctor because she had Googled me before the visit. She noted the way I was dressed and thought I would probably put a lab coat on (by the tone of her voice I could tell she didn't like the lab coat concept). She went on to tell me that my clothes made me "a real human" and it made her more comfortable in interacting with me. I suspect that some other patients may feel differently, but I carefully follow my patient satisfaction scores and must admit that if my clothes are problematic, it's not reflected in my scores. Patients don't really care how their doctor is dressed, as long as the doctor demonstrates empathy, communicates well, and ensures that the patient has access to him/her when they have a problem.

There's an essay in this week's BMJ by Dr. Stephanie Dancer, former editor of the Journal of Hospital Infection. It's entitled, Put your ties back on: scruffy doctors damage our reputation and indicate a decline in hygiene. In her poorly argued essay, which I think is sexist and borders on crazy talk, she attempts to link the bare-below-the-elbows concept to lower standards for infection prevention. She writes:


"No tie"--along with stubble, spitting, picking your nose, and gravity defying trousers--symbolize the real status of hygiene in today's society.

In one paragraph she discounts the role of clothing in infection prevention:


Given that bed linen and pajamas are habitually contaminated with their owners' personal microbial flora, the focus on transmission from what staff are wearing seems disproportionate and perhaps even irrelevant.

This, of course, fails to distinguish between endogenous and exogenous pathogens. A paragraph later she chastises doctors for wearing the same clothes for several days as it "showers the environment with millions of skin organisms."  However, the vast majority of clinicians who wear white coats wear the same coat for days to weeks without laundering them.

I continue to believe that bare below the elbows is useful in infection prevention as it reduces clothing contamination and makes compliance with hand hygiene easier. And I wholeheartedly believe that doctors should appear neat and clean. But I'm still trying to determine biologic plausibility for how banning neck ties has led to nose picking... Maybe it's because neckties function as handkerchiefs!