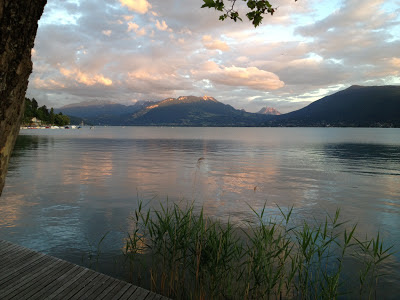 I've been lucky enough to attend the 4th World HAI Forum on Antimicrobial Resistance this week in Annecy. This morning's excellent session on antimicrobial stewardship was chaired by Stephan Harbarth and Herman Goossens and brought to light many barriers to the wider adoption of stewardship by non-ID physicians. For one, the accuracy and economics of rapid diagnostics and algorithms were identified as a major barrier. In particular the negative predictive value, which would allow primary care physicians to stop (or not start) antibiotics, was suggested as a key target.

Another, brought forth by Kent Sepkowitz, was that the whole enterprise of "stewardship" lacks a main outcome measure or at least has transitioned from Decreasing Antimicrobial Resistance, to decreasing costs, shortening length of stay, educating the next generation of clinicians, and finally easing workload for ID specialists and trainees. He suggested that presenting stewardship as a patient safety issue with a primary target of drug resistance rates in key indicator organisms will bring greater rewards. Tom Gottlieb responded that the burden should be on the others to prove that stewardship doesn't work since antibiotics are such a limited resource. Bob Wachter implied that a key "bias" against stewardship in the US is that compared to the patient safety movement, which targets the individual patient as the beneficiary, stewardship benefits "others." Loreen Herwaldt said that a microbiome outcome could provide an individually-focused patient safety target.

Of course, I can't even begin to transcribe and communicate all of the excellent points made by the attendees. Fortunately, two interesting studies were published in the past 2 weeks that examined the impact of stewardship interventions in the outpatient and inpatient settings.

The first study by Jeffrey Gerber and colleagues in JAMA described an outpatient cluster-randomized trial in 18 pediatric practices. They examined prescriptions for acute respiratory infections 20 months before and 12 months after the intervention, which included one 1-hour on-site clinician education session followed by 1 year of personalized, quarterly audit and feedback of prescribing. Prescription of broad-spectrum antibiotics decreased by 6.7% more in the intervention practices compared to usual practice clinics, while off-guideline prescribing decreased by 10.7% more for pneumonia and 14% more for sinusitis. Evidence supporting the public health benefits (i.e. reduced resistance) of this intervention are not described in the paper.  In fact, the word "resistance" appears only once in the entire article.

The second study by Greg Filice and colleagues at the Minneapolis VA examined the impact of an inpatient computer decision support system for antimicrobials on appropriateness of antimicrobial prescriptions in a retrospective cohort. The system was associated with a higher level of appropriate prescribing, 44% vs 33%. However, the most interesting finding was that the most important factor influencing prescribing was the accuracy of the initial diagnosis.  If the diagnosis was correct, prescribing was appropriate 62% of the time compared to only 11% when the diagnosis was incorrect or uncertain. Thus, unless we can help clinicians with their diagnostic accuracy, we will have a limited impact on antibiotic prescribing.

ok, back to the meeting for me...
Email Post
Labels: annecy antimicrobial stewardship ICHE jama stewardship