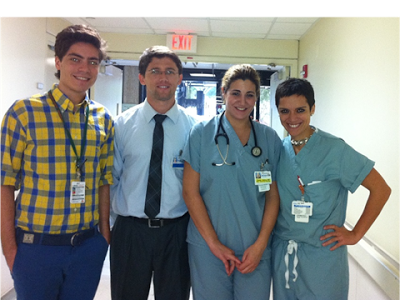 A new study in the American Journal of Infection Control by Dr. Silvia Munoz-Price and her team at the University of Miami provides additional insights on laundering of clothing worn in the clinical setting. In a convenience sample of 160 physicians and medical students, the Miami team found that white coats were laundered on average every 12.4 days, while scrubs were laundered every 1.7 days. I found it a little surprising that for scrubs the frequency wasn't closer to 1.0, but that's tremendously better than 12 days! For both coats and scrubs, faculty laundered their attire more often than housestaff or students. Interestingly, the major reasons given for wearing white coats were: (1) ego (makes me looks and feel like a doctor, 29%), and (2) storage needs (25%). Neither is a good reason.

Both studies were relatively small and performed in a single (though very large) medical center. Nonetheless, there is a body of evidence accumulating that clothing contamination in the clinical setting is a real phenomenon and probably should no longer be ignored by infection prevention programs. So I was delighted a few days ago to see that West Virginia University Hospitals is considering banning ties and white coats.