Influenza Vaccine Has Miracle Powers After All* 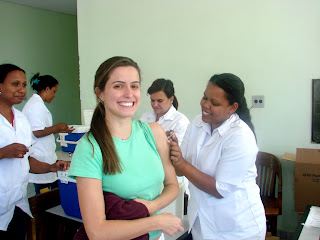 This blog hasn't always been kind to the humble influenza vaccine. So in fairness to our trusty old vaccine friend, I'd like to highlight a recent study published in Lancet ID by Jeffrey Kwong and colleagues in Toronto. They utilized 19 years of data (1993-2011) from the universal health care system databases in Ontario Canada to assess the risk of Guillane-Barré Syndrome (GBS) after influenza vaccination and after influenza infection. They accomplished this using a self-controlled, risk-interval design. This design compares the risk of GBS in a predefined risk interval after exposure to the vaccine or infection and compares it to the risk in the control period outside the selected exposure period. In this case, the exposure period was the first 6 weeks post exposure and the control period was weeks 9-42. Importantly, the patients were conditioned on having GBS in either the risk or control period and each patient served as their own control, which eliminates selection bias. Outcome of GBS was determined using ICD-9 or ICD-10 primary billing codes, which have reported positive predictive values in the 60% range. This is a limitation of the study.

They identified 2831 patients with GBS.  Within the 42 week period, 330 cases were preceded by influenza vaccination and 109 cases were preceded by influenza infection.  The risk of GBS was 1.5 times higher in the initial 6 weeks post vaccination compared to weeks 9-42. The risk peaked in the third week post vaccination with twice the risk. The risk was higher in patients ages 18-64 compared to older adults. Importantly, even this increased risk adds up to one GBS admission per 1 million vaccinated. I also don't think we can rule of influenza infection causing this post vaccine risk since people are more likely to receive vaccine when influenza virus is circulating in the community.

In the 6 weeks post influenza-coded healthcare encounter, the risk of GBS was 15 times higher than baseline and peaked at 61 times higher in the first week post infection. Pending a formal competing risk analysis, patients should continue to be informed of a small increased absolute risk of GBS associated with the vaccine, but also a large risk associated with the infection. Of course, there other benefits associated with influenza vaccination, which should also be discussed with patients. To be clear, influenza vaccine IS a miracle when it's compared to influenza infection.