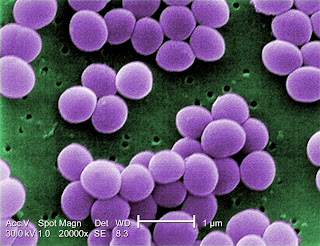 I just returned from a wonderful MRSA conference this past week where I enjoyed learning about how European countries are handling antimicrobial use in livestock and the emergence of potential human pathogens like livestock-associated MRSA. Perhaps I will post further thoughts on the conference later in the week.  However, I just saw this new report in JAC on a novel resistance mechanism in S. aureus, so first things first.

It is known that hyper beta-lactamase producing strains of S. aureus exist and that some strains have chromosomal mutations and resultant modified penicillin binding proteins. These strains can have phenotypic methicillin resistance while lacking the mecA (or mec C) gene. Thus, they can evade detection by genotypic methods and the underlying mechanisms can be missed by phenotypic methods, as Dan nicely described here.

There is now a report by Xiaoliang Ba and colleagues that describes four clinical S. aureus isolates that were found to be MRSA but lacked mec A or mec C. The strains were from clinical wound infections and deposited in the Scottish MRSA Reference Lab. They belonged to sequence types 1, 15 (two isolates) and 8. Three strains were resistant to oxacillin, cefoxitin and PCN by ETest and disc diffusion and the fourth isolate was at the oxacillin Etest breakpoint, while three were beta-lactamase producers. Whole genome sequencing confirmed that none contained a mec-like sequence and that beta-lactamase production was not mediating the resistance. Interestingly they found similar single amino acid substitutions across sequence types in PBP1, PBP2 and PBP3 suggesting independent evolution of the same trait (homoplasy).

The authors acknowledge that their targeted search of the genomes could have missed other possible mechanisms of resistance in these isolates. I would add that this was in four isolates out of an unreported denominator, so we don't know the magnitude of the clinical impact yet. What we can say is that our surveillance techniques had better keep up with S. aureus. Unfortunately, it seems to be just as good at evolving away from our prevention methods as it does our antibiotics.