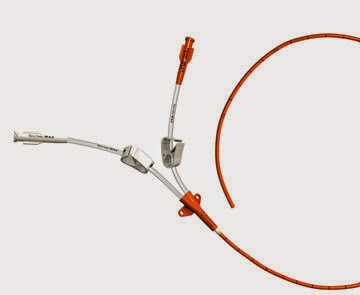 Last month we blogged on updated NHSN surveillance definitions and we bemoaned the fact that CLAMBIs (central line associated mucosal barrier injury bloodstream infections) are not being separated from CLABSIs for public reporting, and more importantly for the CMS pay-for-performance programs. These infections are particularly common in patients with hematologic malignancies, are due to the translocation of enteric flora into the bloodstream, and unlike true CLABSIs are not preventable. A new paper in Infection Control and Hospital Epidemiology from Northwestern University demonstrates why this is important.

All cases of CLABSI were identified over a 14-month period on 2 inpatient hem/onc/BMT units (72 beds). The cases were further subdivided into "true" CLABSIs (i.e., not associated with mucosal barrier injury) and CLAMBIs. A total of 66 infections were identified, of which 47 (71%) were CLAMBIs. E. coli, enterococci and viridans streptococci accounted for 62% of the pathogens isolated.

The authors note that at the present time CLABSIs identified outside of ICUs are not publicly reported nationally; however, the CLAMBI patients spillover into ICUs. At Northwestern, 12% of ICU CLABSIs were determined to actually be CLAMBIs.

Is it any wonder that tertiary care hospitals are disproportionately affected by CMS penalties? This is just one of many reasons.
Email Post
Labels: CLABSI CLAMBI NHSN pay for performance Public reporting