If you're looking for another infection prevention bundle in long-term care, look no further than the March 15th issue of CID that included a cluster-randomized trial of a pneumonia prevention bundle in 36 Connecticut nursing homes by Juthani-Mehta and colleagues at Yale. (full text free)  Residents in the intervention nursing homes with at least one risk factor (impaired oral hygiene or swallowing difficulty) received a bundle that included manual tooth/gum brushing plus 0.12% chlorhexidine oral rinse, twice per day, plus upright positioning during feeding.

The primary outcome was development of first pneumonia defined as "presence of (1) a compatible infiltrate on chest radiograph (CXR) (if previous CXR was available, the infiltrate had to be new or worsened) and (2) at least 2 of the following clinical features within 72 hours of the CXR-documented infiltrate: fever, pleuritic chest pain, respiratory rate over 25 breaths/minute, worsening functional status (ie, decline in level of consciousness or activities of daily living), or new or increased cough, sputum production, shortness of breath, or chest examination findings."  The secondary outcome was first lower respiratory tract infection (LRTI).

After enrolling 834 participants (434 to the intervention arm and 400 to the control arm), the DSMB terminated the study for futility. Results showed no significant differences for cumulative incidence of first pneumonia (Figure 2A, below) or first LRTI between intervention and control arms. In fact, you can see that the intervention arm appears to have higher incidence of first pneumonia, which is concerning. Of note, adherence was 87.9% to chlorhexidine, 75.0% to toothpaste and 100% for upright feeding position in the intervention facilities. The authors offer several explanations for the study's failure, none of which are entirely convincing. For example, adherence at these levels should have still shown some benefit and not a trend toward harm, so it's unlikely that compliance explains the results. For those interested in reading more, there is an excellent commentary by Lona Mody, who we also mentioned last week. And congratulations to the authors and journal for publishing this important negative study. 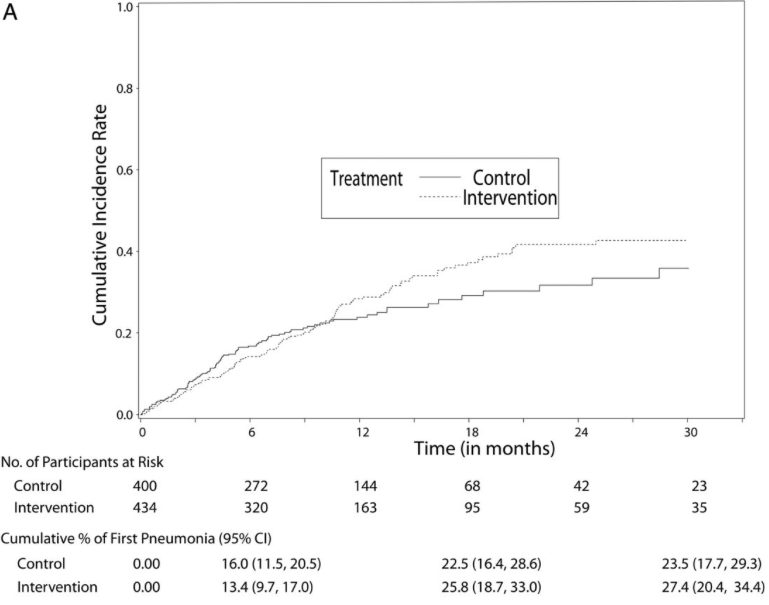