Debating Bare Below the Elbows

At IDWeek in San Diego this past Saturday, I debated Neil Fishman on bare below the elbows, a topic that regular readers of this blog know is one of my favorites. I had 10 minutes to deliver the pro argument and Neil had the same for the con. You can read an unbiased account of the debate here.

Neil argued the following (and I've added my comments in italics):


So what was the verdict? Before the debate, 37% of the audience supported bare below the elbows, and after the debate 42% were in support. So in 10 minutes I moved the needle 5 percentage points. Not dramatic, but I'll take it. But just imagine having this debate 10 years ago, or even 5 years ago; I suspect supporters would account for <10%. 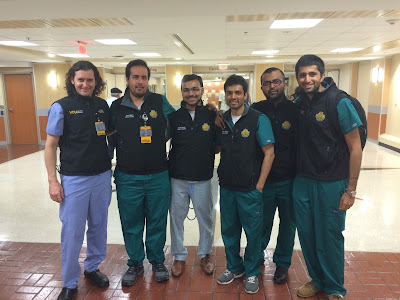 Any intervention that involves changing behavior produces incremental results. But from firsthand experience, I know it can be done. At VCU, we recommended a bare below the elbows approach to inpatient care in 2009. It was a very soft rollout--no mandate, just a recommendation. Gonzalo Bearman, Mike Stevens and I consistently wore scrubs and others slowly joined in. It started with just three people. Last year before I left VCU, we did a 12-week prevalence survey and we were pleasantly surprised to see that 69% of inpatient encounters were via HCWs bare below the elbows. This year, it has increased to 80%. Compliance was boosted when the medical school bought their students scrubs and nylon vests (see the photo of Gonzalo with some VCU medical students). I think this is an amazing accomplishment, and I will venture a guess that 10 years from now, the vast majority of doctors in the US will look just like those in that picture.