A shock to the system

Back in April of 2011, in a blog post about the VA MRSA Initiative, I wrote:


“It seems that HAIs are falling across the VA system, probably as a result of an important culture change, and improved application of so-called "horizontal" approaches to infection prevention. Bravo to the VA!”

Of course, in addition to praising the VA, I called into question the one “vertical” component of the MRSA initiative (MRSA screening/isolation) based upon the dramatic reductions in VRE and C. difficile that accompanied the intervention, and the evidence that very little of the reported MRSA reduction could have been due to reduced MRSA transmission. 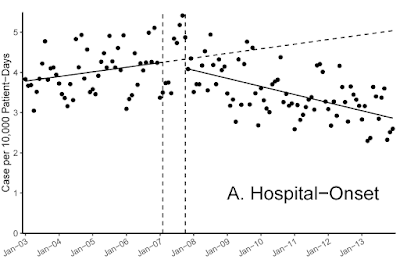 Thanks to Michi Goto and colleagues, we now have even more evidence that the MRSA Initiative coincided with a fundamental shift in infection prevention in the VA healthcare system. Their recently published CID paper adds hospital-onset Gram-negative bacteremia to the list of HAIs that saw significant reductions after the MRSA Initiative was implemented (see graph above). I will outsource most of the rest of this blog post to Maryn McKenna and Marc Bonten, please read their excellent analyses.

Marc ends his blog post by observing that “we still don’t know how” the VA achieved these HAI reductions—in particular, we don’t know the relative importance of the most expensive, resource-intensive aspect of the program (MRSA screening). As someone who served as a VA hospital epidemiologist during the implementation of the initiative, I’ll give my completely unsupported, data-free opinion: the MRSA screening was both unnecessary and essential to the VA’s success.

Unnecessary because the HAI reductions, as Marc’s group demonstrated, were not achieved via the prevention of bacterial transmission that MRSA screening/isolation seeks to achieve.

Essential because it served as a “shock to the system” within the VA. The complexity of implementing any universal screening and isolation program requires multidisciplinary buy-in, major investments in laboratory and infection prevention resources (in the VA system, funding for molecular detection and funding of a new “MRSA coordinator” position, essentially an extra infection preventionist). It’s this kind of system-wide investment that can change the culture, moving basic infection control practice higher on everyone’s priority list. 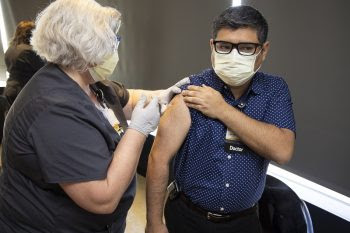 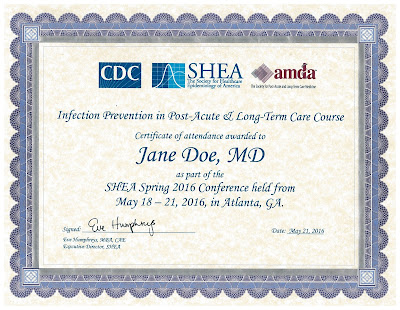