Question: What do mcr-1 and Candida auris have in common?

Answer: Both are emerging infection threats, and neither can be identified by most hospital laboratories.

The mcr-1 gene, which confers resistance to colistin and can be plasmid-mediated (and thus easily spread), was first described in November of 2015 but is now known to be present in over 20 countries (it has also been found in archived organisms going back over 30 years). Of course, it didn’t just suddenly appear everywhere at once—it has been spreading for a long time undetected, and will continue to do so. Many laboratories don’t test for colistin susceptibility, and such testing is highly problematic—the properties of the compound interfere with diffusion through agar and cause adherence to the surfaces used for broth dilution trays (resulting in variable performance by test method). There isn’t even agreement on the breakpoint for resistance. Thus those labs that do perform testing only do so on multiple-drug resistant organisms or upon request—and if resistance is detected, the organism must be sent to a reference lab for molecular detection of the gene (CDC recommends sending Enterobacteriaceae with colistin MIC of 4 mcg/mL or higher, unless they are Proteus, Providencia, Morganella, or Serratia, which have intrinsic colistin resistance).

Candida auris is another interesting story. First described in 2009 in the external ear canal of a patient in Japan, C auris has now been detected in 9 different countries, can cause invasive candidiasis in hospitalized patients, has outbreak potential, and can be resistant to all three major antifungal classes. But again, conventional methods for fungal identification do not identify this newer species (biochemical panels most often ID it as C. haemulonii), and many labs never go beyond the “big 5” species (albicans, glabrata, parapsilosis, tropicalis and krusei), calling the rest “other Candida spp”. MALDI-TOF may soon be useful, but for now it is best to look more closely at invasive yeast isolates that ID as related species (e.g. haemulonii) or that are unusually resistant (provided your lab does antifungal susceptibility testing routinely on invasive isolates).

These two emerging threats reinforce the importance of investment in lab capacity at all levels, from the individual hospital to state, regional and national public health laboratories.

Now to celebrate the 4th of July weekend, a submission from the 2015 ASM Agar Art Challenge: 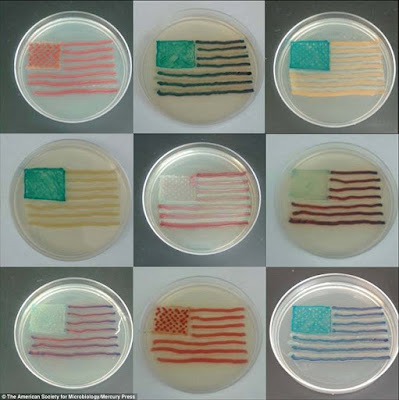