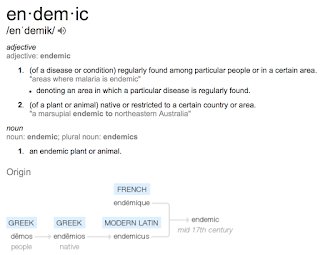 It's been a quiet week out here on the edge of the prairie. Temperatures plunged into the 40s at night and the cooler breezes have been amazing - a nice change from the mid-90's in Geneva last week. I'd like to publicly thank SAS for losing my luggage for 4 days and especially the folks who still talked to me during the meeting. Four days in the same pants - reminds me of a doctor's white coat!

One of the topics that came up at ICPIC and on twitter after the various contact precautions posts and JAMA viewpoints was whether a pathogen's prevalence is an important criteria to use when deciding between types or levels of infection control interventions to implement. Put another way, should we treat common, ie endemic pathogens like MRSA, differently than outbreak or novel pathogens like CRE?

Of course, the first difficulty with answering this question is that endemicity is local, like politics. For example, MRSA is only endemic in certain parts of the US (we have little at the Iowa City VA vs the Baltimore VA) and MRSA remains rare in the Netherlands. Clostridium difficile is common everywhere, except that when we visited Vietnam last year, we heard that it is less common in SE Asia. So, we can agree that it would be difficult to write national guidelines or mandates for specific pathogens if endemicity is an important parameter.

Another question I have is how can we define an endemic threshold?  If we were concerned about MRSA, is it the proportion of clinical S. aureus isolates with mecA? Or would the threshold be set around some level of admission prevalence - say 10%? This might depend on the pathogen and such factors as the colonization to infection ratio.

Finally, I do wonder if using endemic thresholds for deciding whether to relax infection control interventions runs counter to the risk of transmission in our ICUs and wards. One of the most important risk factors in acquiring a pathogen, say VRE, is the colonization pressure (proportion of other patients colonized with the bacteria) on the unit. Doesn't it then follow that as a pathogen becomes "more" endemic, however defined, that the individual risk to the "negative" patient increases. We can agree that it is harder to eliminate a pathogen as it becomes more prevalent or endemic. Yet, elimination isn't the only or even primary goal of infection prevention - it is to protect the individual patients and populations in our hospitals. Usually, endemicity is beyond our control, as there are many outside factors that can impede our efforts. But I don't think we should use endemic thresholds in our decision making.

Of course, we still need to ask basic questions like does the intervention work? Is it cost effective? And to bring this back to contact precautions, I see little evidence that contact precautions are more effective in CRE or CDI control vs MRSA. I also don't see that mortality rates are much higher in those pathogens where we agree to use contact precautions routinely (e.g. CRE) and where there is debate (e.g. MRSA). So there must be other factors driving the decision making, like availability of effective antibiotics, but I don't think endemic thresholds should be one of them.
Email Post
Labels: colonization pressure contact precautions endemic endemicity MRSA