Perry Mason and REDUCE MRSA: Another "Case of the Positive Negative" 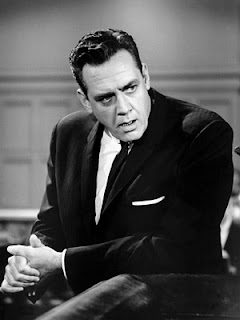 "We need Perry Mason. Someone to put you in place." – Ozzy Osbourne

This week’s articles in the NEJM (Huang et al. “Targeted versus Universal Decolonization to Prevent ICU Infection”) and accompanying editorial (Edmond and Wenzel “Screening Inpatients for MRSA-Case Closed”) left me reminiscing of classic TV courtroom dramas where the well intentioned and sophisticated district attorney has finished presenting his/her case but Perry Mason has just cleared his throat and Matlock is still shining his ankle boots.


For those of you who missed it, Huang and colleagues randomized 74 intensive care units (ICUs) at 43 Hospital Corporation of America hospitals to one of 3 interventions among 2 cohorts.

Decolonization included 5 days of intranasal mupirocin therapy and daily baths with chlorhexidine gluconate (CHG) for the duration of their stay in the ICU.

This was a large, rather well designed, certainly well coordinated evaluation of multiple ICUs across the country. But the case is far from closed.

Defense exhibit one: Follow the blood. This article further affirms an already well conducted study by some of the same authors that demonstrated CHG bathing of ICU patients reduced bloodstream infections in ICU patients (Arch Intern Med. 2007;167:2073-9, ICHE 2009;30:959-63). There’s ample biological plausibility for this and in general, the horizontal (as opposed to vertical one MDRO at a time) approach is more logical. However, this effect in all likelihood has nothing to do with mupirocin, which has never been independently associated with a reduction in bloodstream infections. CHG reduces all-pathogen bloodstream infections in ICU patients: no objection your honor.

Defense exhibit two: An eyewitness-I see you. MRSA infections are not restricted by the boundaries of the unit. An APCHE score is not a pre-requisite to acquiring an MDRO. According to the evidence, ICU patients are at higher risk for MRSA infection, but many of prior studies were conducted in large academic medical centers where and when the case mix was different from today. Arguably, it’s operationally easier to limit intervention and research studies by geography.

Illinois was the first state to succumb to MRSA screening legislation; the legislation which reads that such screening will be performed on patients in “all intensive care units, and other at-risk patients identified by the hospital.” We, in the Land of Lincoln, have all, by design, implemented the former, but the latter is a hodge podge ranging from denial (only ICU patients are high-risk) to the assumed, evidentiary but not all-encompassing (patients from LTC are high-risk) to the near complete (70+ variable model built decision support module embedded in the EMR). The VA as well as my own organization deployed MRSA prevention strategies in ICU as well as non-ICU settings.

This brings me to: Defense exhibit three: A character witness. My organization’s strategy for the past 9 years has been a strategy most akin to Group 2 (screening, isolation and decolonization). Though we started in the ICU, we failed to see the kind of reduction we wanted (see defense exhibit 2) until we later expanded to universal screening. We used this experience to develop a robust multi-variable prediction model that was built as decision support system into our electronic medical record. This tool automatically calculates a MRSA risk score as patient data is entered and evolves within the record during the patient’s admission. When the risk score reaches a threshold the user is instructed to screen the patient. We used this to transition from universal screening to targeted screening in January 2012.

Ok. I am by no means an expert on MRSA. I am good with numbers though.

In the NEJM article, the best intervention for reducing MRSA clinical isolates is a rate of infection of 2.1 per 1,000 patient days. At NorthShore (and for comparison purposes, these measures are in our ICUs only) in the past 38 months, our unadjusted rate of MRSA infection is 0.3 per 1,000 patient days. Their best intervention netted an infection rate ratio versus my own ICUs of 7.0 (95%CI: 4.3-11.5, p=5.9 * 10-23).

Similarly, the NEJM article reported an overall, unadjusted rate of bloodstream infection from any pathogen of 3.6 per 1,000 patient days in the universal decolonization intervention arm. At NorthShore (and for comparison purposes, this is in our ICUs only) in the past 38 months, our unadjusted rate of bloodstream infection is 1.08 per 1,000 patient days. Their best intervention netted an infection rate ratio versus my own ICUs of 3.33 (95%CI: 2.54 -4.38, p=1.3 * 10-22).

I am all too happy when a group of dedicated and brilliant people in hospital epidemiology find a new and improved way to prevent infection. And for this group, they did discover a new strategy for reducing their MRSA and bloodstream infections. I was not surprised to see that they have decided to implement the universal decolonization strategy across all HCA hospitals. But as long as their best rates are between 3 and 26 times higher than mine, I’ll be sticking with my own plan.

Defense exhibit four: If the antibiotic doesn’t fit you must acquit. Arguably, the single greatest concerning factor of this study that wasn’t addressed is the rise of mupirocin resistance. This exhibit, like the preceding, is rooted in personal experience. Until this year, our organization decolonized all MRSA-screen positive patients. During that 8 year endeavor our proportion of mupirocin resistant MRSA increased from about 3% to almost 12%. Nasal decolonization has been most convincingly demonstrated to reduce infection risk in the pre-surgical patient population and arguably only with select procedures. Our rise in resistant strains and the overwhelming desire to reserve this ammunition for the people that really need it (pre-surgical patients) gave rise to our decision to suspend mupirocin decolonization starting in 2013. We hope to see our resistance pattern return to baseline, though such a decline will likely be slow.

Justice may be blind, but we shouldn’t be to known potential adverse outcomes like antibiotic resistance.

Closing argument:  If none of the above convinced you that this case is far from closed at least consider this final argument. Living in Illinois, I am frightened awake at night with the sounds of what I imagine to be fingers typing on keyboards. The well-intentioned hands of a well-meaning lawmaker in our state or federal capital pounding out some new legislation in light of the latest and greatest publication on preventing some iteration of our nation’s bacterial scourges. Convinced that if they don’t do something those conniving hospital epidemiologists and infection preventionists won’t do anything to protect our nation’s sickest and frailest citizens. That all we’re here for is the big money check we get every week. By heaven, we must mandate! *shudder*

This paper, like all well designed and well-conducted studies deserves critical attention and consideration. Consider the methods they used and those they didn’t, the intervention processes they measured (CHG/mupirocin supply) and those they did not (isolation compliance), the settings in which the study was conducted (ICUs) and where it was not (everywhere else) and the outcomes they measured (MRSA and BSIs) and those they did not (antibiotic resistance). You must also compare their outcomes to your own performance. With such a wide variety of organizations the results may be generalizable despite HCA’s additional vertical strategies for MRSA that may have overlapped the study periods. How do your rates in your methods group compare those published here (1, 2, or 3?) versus the alternatives? Use this evidence as a tool for your ongoing risk assessment and make an educated decision before someone makes an uneducated one for you.