My on-again, off-again relationship with the white coat

This is a guest post by Dr. Silvia Munoz-Price, Associate Professor of Clinical Medicine at the University of Miami Miller School of Medicine and Hospital Epidemiologist at Jackson Memorial Hospital.

All the comments after the SHEA attire guidance paper made me reflect a lot, in particular about white coats. So here are my two cents on the topic based on my very personal, and thus very biased experiences.

In a piece like this, I am forced to start with my first conscious experience with white coats, which came from my dad. He would come home –all dressed in white-- after his OB/GYN overnight calls, sit on the sofa with me on his lap and tell me about all his challenging cases. I wanted so badly to be as good of a doctor as he was…but especially, I wanted to look like him…wearing pristine white clothes. Thank you dad for those special moments you shared with me…they were very meaningful.

Let's fast-forward a decade or so to the first clinical rotations in medical school. Wearing the white coat…felt really good. Let’s pause here and give you some context: I did medical school during the nineties in a Latin American inner city public hospital. During my early clinical rotations I had one of my most profound realizations about gender and the medical profession: patients would address any male technician wearing a white coat as a Doctor. Here I come (very young, I admit, less than 20) wearing my white coat. How am I addressed? You guessed right, Miss…which was an accurate description and would have been ok if all my male classmates wearing their white coats wouldn’t have been addressed as Doctors. Those inequalities never ended throughout med school. I thought it was unfair but highly reflective of a male dominated society.

Let's move forward another 5 years, Internal Medicine residency in the US. There are two issues related to attire that I think are worth sharing. One: How often did I launder my white coat? Well, I think it was whenever my sleeves turned disgustingly gray and I could not possibly bear wearing it any longer. Two: nobody ever told me how frequently I was supposed to launder my white coat. While I write this piece I am trying to think if I ever thought the sleeve test was adequate or not…to be honest, I don’t think I ever thought about it. I was too busy and too tired to bother thinking on those alien thoughts.

Fast-forward 5 more years…my period in private practice in the Midwest. It was amazing to me how so few docs wore white coats across the many community hospitals I cross-covered. White coats were substituted by nice—and in some cases, expensive—clothes. During my first year I wore white coats but soon this faded into suits. This is interesting…not wearing a white coat was done by most and accepted by all. No attire guidance, no white coats, no fuss. I am not saying this is right or wrong, after all, it is indeed hard to do hand hygiene with the sleeves of a suit in the way. I just find it interesting how cultural this “white coat” or “no-white coat” phenomenon is.

Another 5 more years: my life in academia. There are at least three points that I frequently reflect on about white coats in this setting:

-One: white coats are a symbol of power. I see this every month in my hospital’s Board Room…towards one side of the table, Department Chairs predominantly males, in their late 50s to early 70s, all wearing impeccable and sparkling white coats (even though many do not see patients any time around that particular meeting)…on the other side, hospital administrators wearing suits. Interesting dynamics. Why do Chairs feel compelled to wear white coats to a meeting if there are no patients around? I understand that some medical professionals think that white coats provide reassurance to patients…but who gets reassurance with white coats in a board meeting? Themselves!

-Two: As an attending in academia, wearing white coats serves as a gender (and maybe age) equalizer.[I think the same might happen with suits in private practice. This is hard for me to explain, so let me give an example and I will let you make your own conclusions. Imagine you are a consultant that comes to a particular hospital rather infrequently. Imagine a fifty-year old male comes into the unit wearing a white coat. Who do you think he is? Probably a doctor. Now imagine a fifty-year old female comes into the same unit wearing the same white coat. Now what do you think? Probably also a doctor. Now, lets get rid of the white coats and put a suit on the male and a dress on the female. What would you think now? Responses will be less homogeneous this time, but whatever you argue would be strongly influenced by your social context and your own personal experiences. White coats are indeed powerful symbols; unfortunately, they do not fully equalize genders. As an example, let me share with you what happened to me a few days ago despite wearing a white coat… here comes a cute old Hispanic lady … “Señorita [Miss], how do I get to 7East?” Yes, sadly, even now in my late thirties and with a second doctoral degree…that continues to happen…but…does it matter? Should it matter? Should I even put any thought into the way family members or families perceive me?

-Three: During 2010-2012 I did a couple of studies looking at contamination of attire. We found that white coats were more contaminated than scrubs and that hand contamination was associated with contamination of white coats, but not with scrubs. Also, in a survey among our providers we found that scrubs were laundered daily but white coats were laundered in average every 2 weeks. This was interesting as nobody had told providers how frequently to launder either piece, but they spontaneously performed laundering with different frequencies on these two types of attires. Why? One is in intimate contact with our skin [scrubs] and the other one is not [white coats]. One has to do with our individual comfort and protection [scrubs], and the other one is mostly in contact with patient’s surfaces [white coats]. The reason why this differential behavior occurs is so far unexplored. Regardless, I decided to start the trend at my hospital to wear scrubs and forego white coats for my teams and me. This lasted about a year and ended as we were writing the SHEA attire guidance, as I decided that I wasn’t going to agree to one thing in that publication and do something else in real life. I have to admit that I really enjoyed being able to wear the white coat again…being able to look and to feel like a real doctor again…and to blend in with my colleagues in academia. My fellows were ecstatic because now they would be able to carry all their stuff in their white coats.

I think the SHEA attire guidance paper had a measured approach to white coats. Even though there is no hard data that attire contributes to horizontal transmission of bacteria, we still felt that there was a need to provide some guidance on how frequently to launder our attire. A minimum of once a week sounded like a good compromise (I wanted this to be a minimum of 3 times a week!!). Regardless, I think this guidance is very helpful, as somebody needed to establish a minimum laundering frequency so that the sleeve test stops occurring.

White coats…such strong symbols of who we are…they not only reassure patients…they reassure us, physicians. Look inside of you…do you think white coats might be hiding some of your own personal and professional insecurities? To some degree…yes. Some of the passionate reactions against the attire guidance paper seem to indicate so. But, we should all be clear that when we discuss white coats, we are not doing this because of infection control reasons. If we used an infection control rationale solely, then there wouldn’t be any use for white coats, as they do not protect patients or providers, I would argue that it is the opposite for patients (we just haven’t proved this yet). Culture, social context, age, gender, and perception… these are all issues tied to white coats.

Let me end this piece with something that happened a week ago in the Board Room. That day I was already writing this piece. The room, as usual, was filled with white coats or suits, and had a marked older male predominance. I was sitting to the side pondering about these thoughts, wearing a white blouse and a red pencil skirt, getting ready to address the crowd. How will this crowd perceive me? A relatively young, Latin physician with an accent…would this perception be different if I were wearing a white coat just like them? And most importantly…should this matter? As I approached the podium and gave them my Infection Control update…I can honestly say that I felt fully confident on what I was saying and how I looked, of what I had accomplished so far, and of all the wonderful things I will accomplish in the future…and all this happened without wearing a white coat. 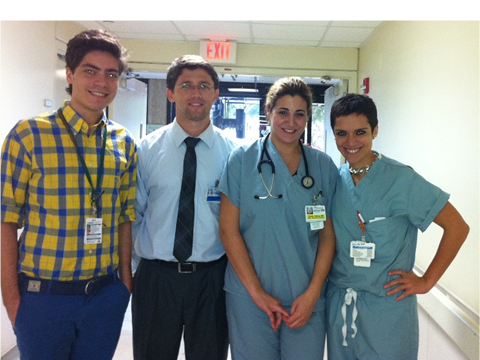