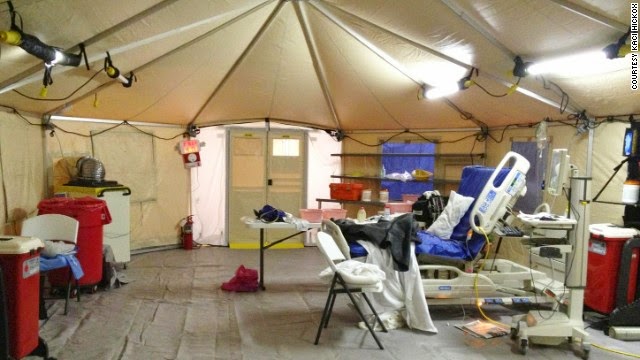 An absurd situation has unfolded in New Jersey, where Kaci Hickox, a nurse who recently returned from Sierra Leone, is being quarantined. While she certainly could be incubating Ebola virus disease given her work with Ebola infected patients, she is asymptomatic, has had two negative Ebola tests, and currently poses no public health risk. To make matters worse, she was escorted to the hospital by a caravan of eight police cars and is being held in a tent (see photo) with no shower or flushable toilet. It is hard to believe that this is happening in the United States in 2014.

It seems that we have entered a new era of postmodern public health. No longer are decisions being made on evidence by experts who understand the epidemiology of infectious diseases, but by politicians who pander to the misinformed for political gain. It's reminiscent of the situation that existed for nearly a decade in South Africa where President Thabo Mbeki denied that HIV was the cause of AIDS, despite all evidence to the contrary.

David Gorski, in his blog Science Based Medicine, writes that from a post-modern viewpoint “scientific medicine is no more valid a construct to describe reality than that of the shaman who invokes incantations and prayers to heal, the homeopath who postulates “healing mechanisms” that blatantly contradict everything we know about multiple areas of science, or reiki practitioners who think they can redirect “life energy” for therapeutic effect. In the postmodernist realm all are equally valid, as there is no solid reason to make distinctions between these competing “narratives” and the “narrative” of scientific or evidence-based medicine."

Returning to reality for a moment, we need to emphasize that mandatory quarantine of healthcare workers from West Africa will not make us safer. In fact, it is highly likely that fewer American healthcare workers will take on the difficult task of treating Ebola in Africa, despite the need for controlling the epidemic there. And without controlling the epidemic at its source, developing countries will continue to be ravaged, and there will continue to be sporadic imported cases in developed countries. Moreover, if one believes that returning healthcare workers should be quarantined, then logic would dictate that healthcare workers who care for Ebola patients in the US should also be quarantined. This will precipitate a crisis since it is highly likely that most healthcare workers would be unwilling to provide care in that situation. And the incredible expense of caring for the Ebola patient in the US would increase greatly.

Kudos to Dr. Anthony Fauci for speaking truth to power today, and to the Society for Healthcare Epidemiology of America for issuing an official statement opposing quarantine of returning healthcare workers.

In an interview several years ago, Stephen Colbert said, "It used to be, everyone was entitled to their own opinion, but not their own facts. But that's not the case anymore. Facts matter not at all. Perception is everything. It's certainty.” And because of that, a few politicians have been able to trump the brightest minds in medicine and public health.