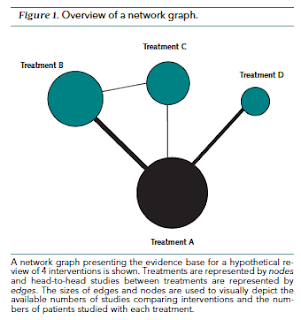 Summer is in full blaze (especially for those in Rome, France and the western US), so we don't have much time for long posts. However, I had to point you to an excellent study in the BMJ (open access) by Luangasanatip et al. that utilized a systematic review and network meta-analysis to determine the comparative effectiveness of the WHO 2005 hand hygiene campaign and other interventions. The WHO-5 Campaign (not to be confused with the WHO 5 Moments) recommended a multimodal strategy consisting of five components: system change, training and education, observation and feedback, reminders in the hospital and a hospital safety climate.

The authors completed a systematic review of interventions from 2009-2014 and used prior reviews to identify other studies. A strength of the analysis was that they looked beyond randomized trials and included high quality quasi-experimental studies including non-randomised trials, controlled before-after trials, and interrupted time series studies. They then completed a network meta-analysis which suggested that the WHO-2005 campaign was effective and compliance could be improved if other interventions were added including goal setting, reward incentives and accountability.

I encourage you to read the full study and the editorial by Matthew Muller. Very nice to see that the BMJ published this important study. And for those in the southern hemisphere, enjoy your cool weather...these summers seem to be getting worse and worse.
Email Post
Labels: annals BMJ hand hygiene meta-analysis network meta-analysis