Is the white coat needed for identification? 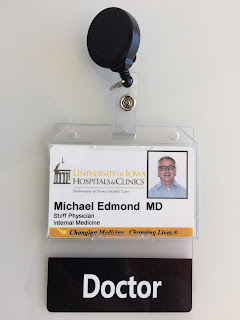 If you haven't read Phil Lederer's piece on the white coat at the Conversation, I recommend that you do so. It is very well written and has stimulated a lot of discussion. One of the take-aways for me is that even among many of those who believe we should ditch the white coat, the one argument that gives them pause is the role of the white coat as a means of identification. This is particularly an issue for women and racial minorities, groups that have been historically underrepresented in medicine.

I have two problems with the argument that the white coat is needed for identification. First, unlike the situation in the 1960s, white coats are no longer exclusively worn by physicians. Members of practically every occupational group in the hospital (with the typical exception of students) may wear a long white coat. It's worn by chaplains, administrative assistants, nurse practitioners, physician assistants, you name it. The white coat no longer signifies that the wearer is a doctor. And we have more specific means of identification. Many hospitals now have large occupation-label tags attached to photo IDs (mine is shown), which should be more effective than the type of coat worn.

The second issue I'll articulate is controversial and will probably get me into trouble, but I think it's an important argument to explore. I'm really bothered when a physician says, "If I don't wear a white coat, patients think I'm a nurse." To feel insulted that someone might think you are a nurse implies what you really think about nurses--that they are beneath you. Would an internist (male or female) feel disrespected if someone thought he/she were a neurosurgeon or the chair of the department? I doubt it. And I've mentioned previously that I've been mistaken for a nurse or respiratory therapist many times when I'm wearing scrubs in the hospital, though less so now that I wear my name tag on my scrub shirt (I used to wear my name tag on my waist band but that's not allowed at Iowa). I don't find being misidentified insulting in the least. I just simply answer that I don't have the keys to the medication room or that I'm probably not the best person to change the ventilator settings.

Several years ago (long before I began thinking about killing the white coat) my wife and I and several other people were at a dinner with a visiting professor. My wife made a comment during the conversation about something medical and he said, “Oh, are you a nurse?” She said quite nicely, “no, I’m an oncologist.” He replied, “I’m so sorry that I asked if you were a nurse.” And she said, “Don’t be sorry! I was a nurse. I loved being a nurse. And if tomorrow I were a nurse again, I'd be very happy.” We discussed that interaction last night. As she reflected on the white coat issue, she pointed out that she thinks it's great when a person is proud of their profession, and how the white coat for many people symbolizes that pride and their achievement of completing a very long journey. For some, it also symbolizes the enormous barriers that they have overcome. But she noted that the white coat should not be used as a symbol of who you are not.

I've come to realize that a physician feeling insulted if someone misidentifies them is yet another negative manifestation of professionalism. We as physicians have been socialized to think that we are elite, that we are at the top of the pecking order, that we are better than all the other people who work in health care. That has been given to us unfortunately by our physician colleagues and is part of our culture.

I don’t want to be (or even appear to be) insensitive. I realize that as a white man I’ll never know what it feels like to be an African American woman. But we are trying to eliminate the white coat for patient safety, which should trump all else. Remember that one of the good tenets of medical professionalism, at least historically, is that the patient comes first. Moreover, we are all called, regardless of race or gender or socioeconomic status, to respect all humans (ahh, humanism!). And to verbalize disdain at being identified as a member of another occupation, in my opinion, is classist and incredibly disrespectful.