Last September, I had the honor to attend the Infection Prevention Society's Infection Prevention 2016 conference in Harrogate, England. During the conference, I was fortunate to meet Professor Graham Ayliffe and give the annual Ayliffe Lecture on the Science Behind Hand Hygiene and I also got to meet and discuss infection control with many of the dedicated members of the Society. Attending the IPS conference was a great way to learn how infection control interventions are implemented in other countries.

"Where we implement or de-implement CPs will depend on how we frame the literature findings and our local institutional infrastructure, epidemiology, specific MDRO rates, patient factors, and institutional culture along with the local staffing and laboratory capabilities."

Jon Otter at the Reflections blog had a nice overview of our debate. He concluded:

"It was a slightly odd set-up in that Fidelma was arguing against contact precautions from a hospital that uses them, and Eli was arguing for contact precautions from a hospital that doesn’t! But I got a sense that the debaters were putting across genuine views, and not talking to a side of the debate they didn’t subscribe to. My conclusion: contact precautions make sense and fulfil the logical idea of ‘disease segregation’. The studies that seem to show stopping them makes no difference are probably explained to a large degree by the fact that they’re not done right in the first place! It was interesting that all agreed that you should apply contact precautions for the ‘really bad bugs’ (like CPE and C. difficile diarrhoea), so what is the logical difference between these and other organisms?"

Post debate, the attendees were charged with voting Against or For the motion supporting contact precautions with their feet. A fun idea! 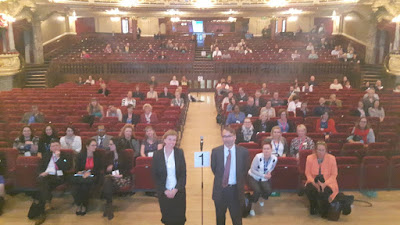