Chlorhexidine bathing outside the ICU: Await the ABATE! 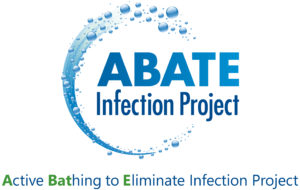 Daily chlorhexidine (CHG) bathing has become routine in many ICUs. Given that more healthcare-associated infections (HAIs) (including more central-line associated bloodstream infections (CLABSIs)) occur outside of the ICU, many hospitals have also implemented this practice on general medicine and surgical wards. However, to this point there are few data to support the effectiveness of CHG bathing outside of ICUs.

So I was very excited to hear Susan Huang present the results of the Active Bathing to Eliminate Infection (ABATE) study at IDWeek last week. Similar to the REDUCE MRSA study, this 53 hospital cluster-randomized trial took place in the Hospital Corporation of America (HCA) system. Units were randomized to routine care or decolonization (this consisted of daily CHG [4% rinse-off shower or 2% leave-on bed bath] with addition of mupirocin nasal ointment for 5 days if + for MRSA by history or culture/screen) for a 21-month intervention period (after collecting baseline data for 12 months). The primary outcome was MRSA or VRE clinical isolates, and the main secondary outcome was any bloodstream isolate attributed to the unit (for common commensals, 2 or more + cultures).

With the requisite reminder that it is always best to wait for the peer-reviewed publication to make firm conclusions, the results presented at IDWeek suggest the likely take-home from this study: No measurable benefit in the entire population, but significant reductions in MRSA/VRE clinical cultures and bloodstream infection in the subgroup with devices (central lines, midlines, and lumbar drains). This subgroup represented 12% of the study population but accounted for 34% of all MRSA/VRE events and 59% of bloodstream infections. The additional reductions in the decolonization arm for this subgroup (compared with routine care) were 32% for MRSA/VRE cultures and 28% for BSI (both highly statistically significant).

Once published, these findings will leave infection prevention programs with some interesting decisions. A quick take might be, “OK, let’s just use CHG in those non-ICU patients with devices (or just central lines).” However, this isn’t what the ABATE trial evaluated—it showed a substantial reduction in MRSA/VRE/BSI outcomes in patients with devices when everyone else was also receiving CHG (+/- mupirocin). To assume that the decolonization of the non-device population had no beneficial effect on those with devices is to discount any potential role for reduction in pathogen transmission between non-device and device patients. Another tricky question has to do with the role of mupirocin—adding this agent to CHG for known MRSA carriers without knowing how important this component of the intervention was adds some logistical complexity, cost, and antimicrobial resistance concerns (the investigators are also doing the microbiology work to assess for CHG and mupirocin resistance emergence).

We’ll revisit this study once it is published and all the details are available. For now we should congratulate Susan and the entire ABATE trial team for another tremendous contribution!
Email Post
Labels: ABATE chlorhexidine decolonization IDWeek mupirocin Susan Huang