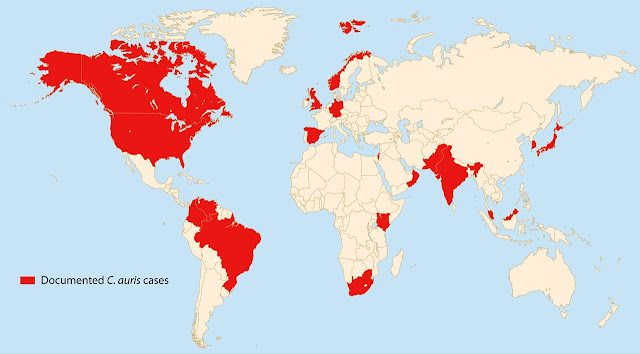 During my intern rotation on the University of Virginia bone marrow transplant unit, I convinced myself that a Candida krusei epidemic was brewing. One of my patients was infected, and the bug was (and is inherently) resistant to fluconazole, a drug that had only recently been introduced (yes, I’m old—the year was 1990). This never really came to pass—despite 30 years of widespread fluconazole use, C. krusei still accounts for < 5% of invasive candidiasis, and outbreaks are rare.

Now, a Candida species that wasn’t even described a decade ago is emerging as a major problem in ICUs around the world. The Candida auris story is fascinating, puzzling, and concerning. For reasons nobody understands, the species emerged (or began to recognized) almost simultaneously on three different continents. Although risk factors for invasive C. auris are similar to those for other causes of invasive candidiasis (ICU stay, antibiotic exposure, device use), it also features high rates of antifungal resistance, persistence on environmental surfaces, resistance to commonly used disinfectants, frequent transmission in ICU environments, and has thus caused several large, difficult-to-control outbreaks.

If you want to catch up on this emerging pathogen without spending hours on a literature review, there’s an excellent summary publication now out in Clinical Microbiology Reviews from Anna Jeffery-Smith and colleagues. See Table 4 for a summary of infection prevention recommendations from UK, US, EU and South Africa.
Email Post
Labels: Candida auris epidemiology infection prevention