Skip to main content
Labels
Posted by Eli Perencevich May 10, 2018 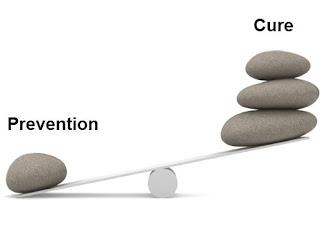 One of the barriers to infection control and antimicrobial stewardship is the lack of financial support from third-party payers, such as insurance companies and medicare. For example, wouldn't it be great if we could bill for hand hygiene every time it was practiced correctly? The end result of this lack of support is that society is willing to pay thousands for a CABG surgery, for example, but not willing to spend a penny on preventing a surgical site infection.

There is a new perspective in the NEJM by two physician behavioral economists, Katherine Pryor and Kevin Volpp, that examines barriers to putting preventive services on equal financial footing with treatments. While their comments largely focus on patient-targeted (vs population targeted) preventive services like lifestyle-modification for diabetes prevention or smoking cessation, they highlight many barriers that could apply equally to population-level interventions like infection control. I've highlighted a few:

"...treatments determined by the Food and Drug Administration (FDA) to be safe and effective are usually covered by insurers regardless of their cost, but preventive services have been held to a higher standard: they are often assessed on the basis of whether they generate a positive return on investment and save money in the short term. This disparity leads to overprovision of treatments and underprovision of preventive services"

"Even Medicare — which typically covers beneficiaries for life — holds preventive services to a higher standard, applying cost-effectiveness analyses when making coverage decisions about preventive services but not treatments. This double standard has resulted in coverage of cost-ineffective therapies with prices of up to hundreds of thousands of dollars per quality-adjusted life-year, including treatments of questionable benefit"

The perspetive is worth a careful read. Would also be nice to see a similar commentary describing these barriers from an infection control perspective too.
Email Post
Labels: behavioral economics Commentary economics infection prevention NEJM