I'm a creature of habit. My first activity every day is to read the New York Times. Depending on my schedule, some days I read more articles than others. This week I was away at a conference and found myself with some early morning extra time before the first meeting session, so I delved into the Arts section. I began to read the first article: Women of the Philharmonic Can Play It All. Just Not in Pants. It begins:

But when the women of the New York Philharmonic walked on stage at David Geffen Hall recently to play Mozart and Tchaikovsky, they all wore floor-length black skirts or gowns. And they’re required to: The Philharmonic, alone among the nation’s 20 largest orchestras, does not allow women to wear pants for formal evening concerts.

The article goes on to discuss some of the unique problems that this dress code presents for musicians, such as the difficulties encountered when playing large stringed instruments, and one woman who plays the English horn recounted how the folds of her long dress got caught in the keys of her instrument during a critical passage.

I found the article interesting, but as an outsider to the music world simply thought that it's another example of how the frivolous often eclipses the big issues in life. Then I came to this quote from a female violinist, “One thing is really clear: People in the orchestra want to remain dressy. It’s important that we look like we care. That is sending a message. We put so much into the preparation of our programs that, yes, we need to look good as well.” At this point the light bulb turned on and all of the dots connected for me: here is the musical equivalent of the judgmental doctors who think that all doctors must wear white coats. And then I knew that the pathologic manifestations of professionalism are not limited to medicine.

Well at least in medicine our clothing police aren't sexist, I thought. But then I remembered that it was only three years ago that Mayo Clinic dropped its pantyhose requirement for women physicians. And in a recent essay, Roshini Pinto-Powell, the Associate Dean of Student Affairs at the Geisel School of Medicine at Dartmouth, writes about how professionalism forces nearly every woman interviewing for medical school or residency to follow rigid rules of dress that makes her look like a penguin. Maybe we aren't ahead of the New York Philharmonic after all.

You might think that in medicine we've overcome ageism and classism in our sartorial expectations. However, it's worth pointing out that the Department of Medicine at Johns Hopkins is just now dropping the requirement of short white coats for interns. In the video attached to this article about that in the Baltimore Sun, the Internal Medicine Chief Residents express their sorrow at the loss of the short coat. Really? In 2018? Yet almost everywhere medical students are still relegated to the short coat. How about we just get rid of them all given that hierarchy with its associated authority gradient in medicine makes it much less likely that a short-coated person will speak up when she sees a long-coated person about to make an error? 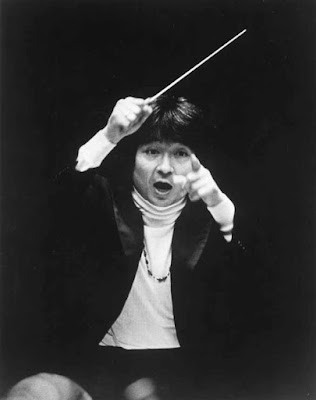 On a happy note, there are always positive deviants, and I want to point out two of them. In the musical world, there is Seiji Ozawa, who was the conductor of the Boston Symphony for three decades. Instead of wearing the customary white tie and tails, he boldly wore a white turtleneck and tails, a look that became his trademark. The other is Jorge Mario Bergolio. As he was about to step out onto the balcony in St. Peter's Square to be introduced to the world as Francis, he was handed the mozzetta, a short red velvet cape trimmed in ermine worn only by the pope. He declined this heirarchical symbol despite the professionalistic expectations of his peers in the College of Cardinals.

I remain convinced that we need to assess work attire using simple humanistic criteria. Your clothes should be clean, comfortable, functional, and safe. No need for white coats. No long gowns. No mozzetta. No penguin suits. And the only people that will care are those who remain blinded by professionalism.