Skip to main content
Labels
Posted by Dan Diekema May 12, 2009

I’ve pasted a couple graphs below, from the CDC’s surveillance report for influenza (the data are 1-2 weeks behind, ending the week of May 2nd). If you look at the first graph, it appears we’ve had a massive increase in influenza. This represents increased testing in response to concerns about H1N1 spread, as is reflected in the big jumps not only in the novel H1N1, but also in the other circulating strains of influenza A and B. In fact, the majority of the positive tests constitute influenza strains other than the novel H1N1. The other chart shows that influenza and pneumonia mortality remained below the epidemic threshold. I expect, and hope, that it will remain below the epidemic threshold through the end of this flu season. 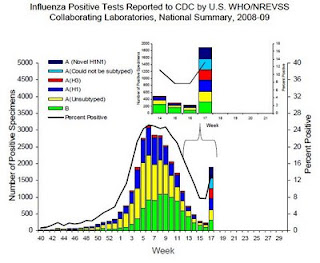 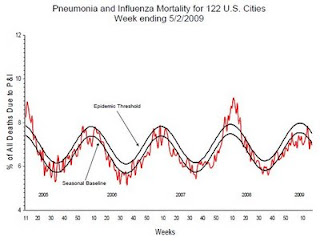 In other news, I expect that Iowa will soon join Minnesota and adopt infection control recommendations that reflect the WHO guidance, rather than that of CDC. As Mike pointed out previously, CDC really needs to update their interim guidance on this—too many hospitals are running short of N95 masks, and now that basically anyone in the U.S. with fever (or no fever) and cough has suspected H1N1, requiring N95s for patient contacts is not sustainable.
Email Post
Labels: H1N1 influenza swine flu