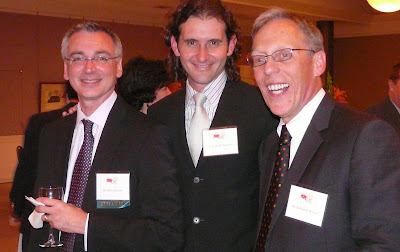 Last night we celebrated Dr. Richard Wenzel's achievements as he prepares to step down as Chair of Internal Medicine at Virginia Commonwealth University. Many of his former trainees were in attendance. Widely regarded as the world's leading hospital epidemiologist, he has published over 500 papers and three textbooks, along with founding two journals. An endowed professorship has been established to honor his numerous contributions to VCU. See the photo gallery here.

I have included my prepared remarks from last night's program:


Although it may seem somewhat odd, I decided on the subspecialty of infectious diseases as a career choice when I was a second year medical student. Perhaps even more strange, I decided to become a hospital epidemiologist when I was a third year medical student. So I carefully laid out my plan to complete an internal medicine residency, fellowship in infectious diseases and a Masters in Public Health, so that I would be ready to be a hospital epidemiologist. And that's exactly what I did. Years later, when I had completed my MPH degree and was three-quarters of the way through my ID fellowship, I somewhat suddenly came to the realization that I didn't know the first thing about hospital epidemiology. So I began to ask infectious diseases physicians that I knew how I could become a hospital epidemiologist, and every single answer started like this: "there's this guy in Iowa and he wrote the book, and if you're serious about this, that is where you need to go." Less than a year later, I drove across the country and settled in to a new chapter of my life in Iowa City.

I went to Iowa City with more than a little trepidation, but based only on my brief interactions with Dick Wenzel to that point, I knew this was the right thing to do. I soon found myself part of a vibrant community of young doctors with the aspiration of becoming hospital epidemiologists, all like me, who came to Iowa City to learn from him. We were at the global epicenter of hospital infection control.

With a person as accomplished as Dick, who has a CV so large that  it requires wheels, it would be easy to say that the record speaks for itself. But that would only give you half the story. So I want to focus my comments on something known only to those he has trained, his role as a mentor.

Over the course of his career, Dick has trained 50 hospital epidemiologists who now lead infection prevention programs around the world. I suspect that all of them would describe their fellowship as a magical time--a time of exploring exciting ideas, of learning to think critically and to refine analytical skills, of feeling that you were a part of a community of scholars—past and present—all sharing the same goals. All of this was wonderfully and carefully shepherded by Dick. There was never a time when any of us ever felt that he was too busy to discuss our research. He never missed an opportunity to promote the work we were doing or to give us opportunities to share authorship with him. His enthusiasm for the work was infectious and most importantly, he inspired all of us. In his warm, encouraging manner, he made you feel good about your work while he taught you to do it even better. He handed down to us a way of thinking and approaching problems. Without question, he served all of us as the ideal mentor, and in doing so launched all of our careers. As a testament to his mentorship, when he asked me to come to Richmond and join the VCU faculty in 1995, I didn't say “yes”, I simply said: “what day do I start?” And I moved here without ever having visited Richmond previously.

There is an upside to being in the remedial program for fellows as I have been. Unlike my counterparts who all graduated and moved on, I have had the great fortune of continuing to learn from Dick for the past 17 years. And I have to say that when I think of my favorite moments of work life here at VCU, it's when just the two of us sit in his office and discuss the important issues in our field.

I think the mark of a good mentor is the degree of affection in which your trainees hold you across time and space. And by that measure, Dick is the gold standard. If you have ever attended a national or international meeting with him, you quickly see that he holds rock star status, as a crowd of people persistently follow him through hotel and convention hall lobbies.

Now tonight is a wonderful night to celebrate Dick's many achievements, but we would be remiss if we stopped there, because JoGail has been so much a part of all that he has done. She has been instrumental in helping fellows and their families not just move to and settle into a new part of the country, but in many cases to a brand new continent. She has a special ability to relate to and understand people. Her warmth and sincerity make all who meet her feel immediately at ease. Together JoGail and Dick have so graciously welcomed all of the fellows into their home and their family.

And so Dick and JoGail, on behalf of all the fellows that you have mentored, I'll leave you with the elegantly simple words of Sebastian from Shakespeare’s Twelfth Night:  I can no other answer make, but thanks and thanks and ever thanks.