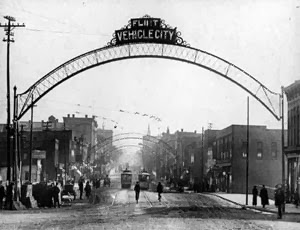 Epidemiologists are drawn to London for its role in the etiological tale or origins of their field. It's hard to discount the importance of John Snow's investigation of the Broad Street cholera outbreak of 1854 and its role in advancing public health. Even when looking at the simple case-control study, many are first taught about the methodology using Doll and Hill's famous 1947 study linking smoking and lung cancer, which was completed in London hospitals.

Digging even deeper, we see that the initial case-control study was thought to be Janet Lane-Claypon's report comparing 500 women with and 500 women without breast cancer admitted to London and Glasgow hospitals published in 1926. However, as in many historical investigations, claims of "firsts" in epidemiology are often overturned upon further review. And while London will always have a special place in epidemiologists' hearts, it turns out that another city needs to be recognized; a city we often ignore...

For those of you not familiar with US or automotive history, Flint Michigan is best known as the birthplace of General Motors and like many industrial midwest towns, it has fallen on hard times. Beside GM, it is also the birthplace of Sandra Bernhard, Bob Eubanks, Michael Moore, Grand Funk Railroad, Glen Rice and, apparently, the Case-Control Study.

In a paper published in the December issue of the American Journal of Epidemiology, Alfredo Morabia uncovered an old case-control study by George Ramsey buried in a 1925 issue of the American Journal of Hygiene. In July 1924, there were 41 cases of Scarlet Fever; a high rate in the summer. A dairy inspector soon learned of an employee at an ice cream plant who had continued to work even after he developed a sore throat and rash (presenteeism!!). However, an investigation of the case patients with scarlet fever did not identify a specific risk factor, including ingestion of ice cream from a single dairy. Then the investigation was "supplemented" by histories taken from 117 controls, who did not have scarlet fever. The questioning revealed very few differences between cases and controls except that cases with scarlet fever were much more like to frequently eat ice cream (60%) compared to controls without scarlet fever (24%). When the investigators looked specifically where cases bought their ice cream, they identified a specific factory as the culprit (see Figure below).  It turned out that Factory A was where the sick worker had worked! Further testing revealed hemolytic streptococcus in ice cream samples from Factory A. 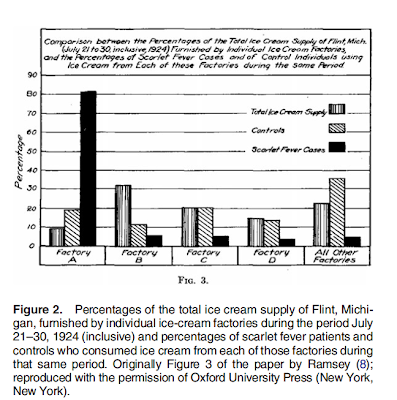 The Discussion section of this recent paper points out that most of the advancements in epidemiological methods occurred in cancer and heart disease. Apparently, there was not another case-control study used in infectious disease epidemiology until 1940. What is amazing is that it appears the Dr. Ramsey and the Michigan Department of Health hit upon the case-control design all by themselves. The paper concludes: "Flint, Michigan, the cradle of General Motors and of recognized labor unions in the United States, appears to have also been a birthplace of case-control studies."  Merry Christmas Flint - hold your heads up high!