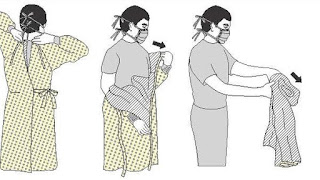 There's a new paper in the American Journal of Infection Control by Keith Kaye's group at Wayne State. The paper is entitled Degowning the controversies of contact precautions for methicillin-resistant Staphylococcus aureus, and it's a systematic review of the literature on the use of contact precautions to prevent transmission of MRSA in the endemic setting. I'll cut to the chase, so spoiler alert for anyone who doesn't want to know what they found until they can read the paper. The authors concluded that contact precautions does not reduce transmission of MRSA.

Every day in the US there are roughly 500,000 people who are hospitalized. If 5% of those inpatients are isolated for MRSA, there are 25,000 persons isolated daily. That's a lot of plastic, paper and tormented patients and healthcare workers. Based on a previous study that determined that on average 48 gowns and pairs of gloves are used per contact precautions patient per day at a cost of $35, that amounts to 1.2 million sets of PPE daily, with a national daily cost of isolation of $875,000. On an annual basis, that's 438 million sets of PPE at a cost of $319 million. And this results in the generation of 49 million pounds of garbage yearly. In lean thinking, that's a lot of muda.
Email Post
Labels: contact precautions