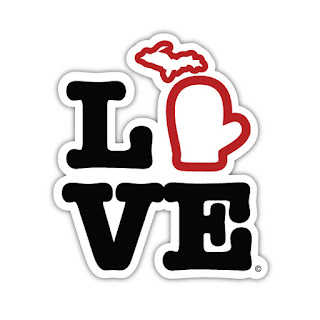 Contact precautions get very little love on our humble blog. So little in fact, that I've taken it upon myself to be the resident contact precautions fanboy. Just today on rounds, I was waxing sentimental about the poor yellow gowns that protect us from horrible pathogens and how we unceremoniously toss them into the trash after wearing them - we never even say goodbye...but I digress

There is a new study in the September ICHE by Mary-Claire Roghmann and colleagues from the University of Maryland and University of Michigan that sought to estimate the transmission of MRSA from nursing home residents to healthcare workers' gowns and gloves based on clinical activity and resident characteristics (i.e. skin integrity or stool incontinence).  They aimed to determine if there were certain situations where wearing gowns/gloves would be most protective of HCW contamination (and thus reduce MRSA transmission).  The logic - if gowns and gloves are contaminated, the underlying hands would be contaminated if gloves/gowns weren't worn and since no one has ever gotten hand hygiene compliance near 90-100% anywhere, including nursing homes, then gowns/gloves result in cleaner hands and less MRSA transmission. I know, much more complicated than a cluster-RCT, but important data...but I digress again...

RESULTS! Overall, they enrolled 401 nursing home residents from 13 facilities including 113 (28%) who were MRSA colonized. 62% were nasally colonized, 9% were colonized at the perianal skin and 28% were colonized at both sites. There were 954 HCW interactions (median 7 per patient) with MRSA+ patients with a median duration of 6 minutes. Overall, gowns were contaminated after 14% of the interactions and gloves were contaminated 24% of the time. Gown/Glove isolates were identical (Spa type) to patient isolates 89% of the time. Overall, the contamination rate ranged from zero to 24% for gowns and 8 to 37% for gloves based on activity. So as far as hand contamination goes, there were no safe interactions and thus, we wouldn't expect activity-based precautions to be effective. (See figure below)  Significant predictors of glove/gown contamination included dressing, transferring, patient hygiene, changing linens and changing diapers. 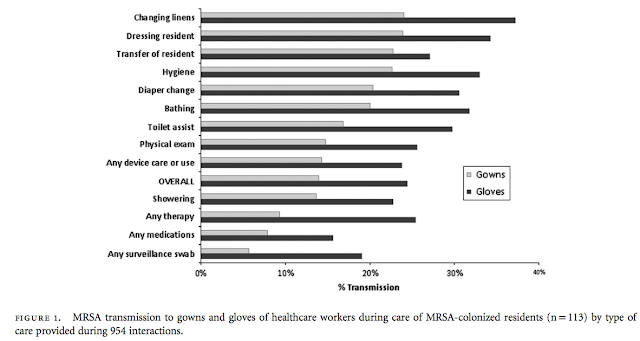 As far as patient characteristics, stool incontinence did not modify gown/glove contamination with MRSA, but skin breakdown was associated with higher contamination when healthcare workers transferred the patient, changed their diapers and helped dress the patient.

My interpretation of the study is that if we want to limit the substantial transmission of MRSA in nursing homes, we better up our game. And that game should probably include gloves and perhaps gowns for most of the analyzed patient care activities. Unless we can get hand hygiene compliance up to 100%, we better just learn to love the glove.
Email Post
Labels: contact precautions gloves gowns ICHE long-term care facilities Maryland Michigan nursing homes