Will you trade me a CLABSI for a pneumothorax?

There was an interesting new study published today in the NEJM by Jean-Jacques Parienti and colleagues and funded by the French Ministry of Health. The study aimed to compare the rates of catheter-related bloodstream infection and symptomatic deep-vein thrombosis (DVT) in 2532 adult ICU patients randomized to subclavian (N=843), jugular (N=845) or femoral vein (844) sites for nontunneled central venous catheter insertion. Baseline characteristics were very similar across the three groups.

The results are not very surprising with higher rates of infection and symptomatic DVT when catheters were inserted using the jugular and femoral veins compared to the subclavian veins but these were almost cancelled out by a higher risk of pneumothorax when using the subclavian approach. (see figure below). 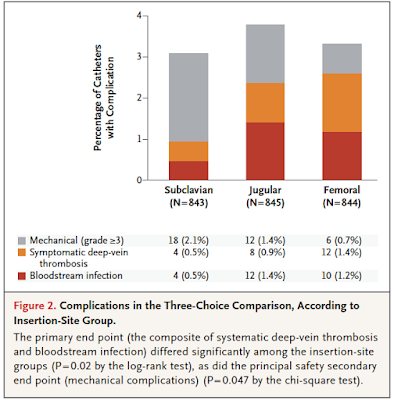 Here are my thoughts on the paper:
**Edit: Mike kindly informed me that hospitals are also penalized for iatrogenic pneumothorax through an AHRQ patient safety indicator, which is included in the CMS Hospital-Acquired Condition Reduction Program. Thus, selecting a subclavian site could lower your CLABSI penalty but raise your pneumothorax penalty. Of course!
Email Post
Labels: CLABSI DVT femoral France jugular NEJM pneumothorax subclavian