Orange is the new nudge 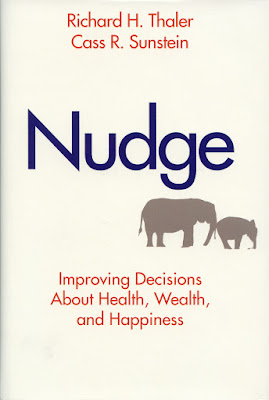 A few year's ago, I read the book Nudge, and ever since I've been fascinated by the concept. A nudge is a stimulus that leads to a desired behavior but doesn't force it. For example, in school cafeterias placing fruit at eye level results in more fruit consumption. No one is forced to eat more fruit and potato chips aren't banned, but more fruit gets eaten. Another example is painting horizontal lines on highways, which causes drivers to slow down. So, the million dollar question for hospital epidemiologists is: how can we nudge healthcare workers to wash their hands?

There's a very interesting paper in Health Psychology that attempts to identify hand hygiene nudges (free full text here). At the University of Miami, investigators randomized approximately 400 HCWs and visitors at the entrance to an ICU into three groups: a control group that received no stimulus, a group that was given an olfactory stimulus (citrus smell dispersed by an aroma dispenser), and a group given a visual stimulus (a photograph of eyes placed above the alcohol gel dispenser). The last group was subdivided: for some the photo was middle age male eyes and for others the photo was female eyes.

The same investigators in a previous study showed that citrus scent was associated with significantly higher rates of hand hygiene compliance when medical students and interns examined standardized patients in a simulation center.