New twist in the infection control vs. religion battle 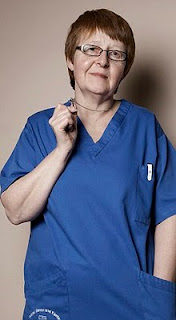 We have blogged several times about the issues in the UK regarding religion and infection control. In a recent posting, I noted that the NHS softened its stance on bare below the elbow by allowing Muslim women to wear disposable sleeves. And they have given an exemption to Sikhs who wear karas (a bracelet) if they can be pushed up the arm when providing patient care. However, the crucifix remains banned, and this is causing a bit of a stir in the press. The nurse at the center of the controversy is pictured here holding the crucifix. Officials have previously stated that the crucifix is an infectious risk; now they argue that it could scratch a patient. It seems to me that disposable sleeves are a reasonable accommodation, and with a little imagination you would think the NHS could come up with a solution for the healthcare workers who wear a crucifix. Nonetheless, I find it hard to understand how the crucifix in question is either an infectious risk or a safety risk.