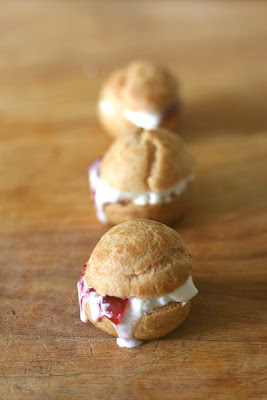 The Sydney Morning Herald is reporting that 3 patients in 2 Sydney hospitals have developed listeriosis after consuming profiteroles served to patients at the hospitals. The infecting strain in all patients was identical. One of the patients has died from an apparently unrelated cause.

Nosocomial foodborne illnesses, particularly those of bacterial origin, are seemingly uncommon. I suspect this is likely due to a lack of appetite in many hospitalized patients, and the highly processed nature of hospital foods (sometimes I'm not sure it's actually food).

A few weeks ago, while making morning rounds on the inpatient infectious diseases consult service, I went to see an immunosuppressed patient with pneumonia. As I was about to leave his room, I noted a clear plastic container of macaroni salad on his overbed table that had been served the evening before. My paranoia of foodborne infections must have been palpable. He thought it was quite funny that I alarmingly said, "Don't eat that!" While laughing at me, he said, "that's old Doc, I'm not gonna eat that." Just to be sure, I threw it in the garbage, which made him laugh all the more.