Over here in the US hinterland we're completing a systematic review of MDRO outcomes for CDC in cooperation with investigators in Salt Lake City. At the moment we're tackling C. difficile and are busily pouring through the literature. We've come across many good studies, such as an ICHE paper from early 2013 by Gase and colleagues from the New York State Dept. of Health that compared NY State CDI surveillance to NHSN in 30 hospitals. The authors noted an 80% agreement between the methods and thus recommended that NY State adopt the NHSN LabID method because of ease of implementation.

Building on that study, Haley and colleagues also from the NY State Dept of Health completed an analysis of the sources of bias in NHSN "Hospital Onset" CDI rate calculations using data from 124 NY hospitals. Their findings were published in the January 2014 issue of ICHE and were accompanied by a nice editorial by two of my former Maryland colleagues Jessina McGregor and Anthony Harris. The NY authors looked at how auditing, including outside labs, age adjustment and exclusion of "patient days not at risk in the denominator" would improve the calculation of hospital-onset CDI rates. As you can see by the portion of Table 2 that I pasted below, most of the corrections had minimal impact on the average hospital-onset CDI rates.  However, "exclusion of patient-days not at risk" had a huge impact on the calculated HO-CDI rate. The correct rate after controlling for all factors was 11.6/10,000 patient days; however, excluding auditing or outside labs, or age adjustment had minimal impact, whereas not excluding patient days not at risk from the denominator led to a rate that was 45% lower (6.4/10,000 pt-days). 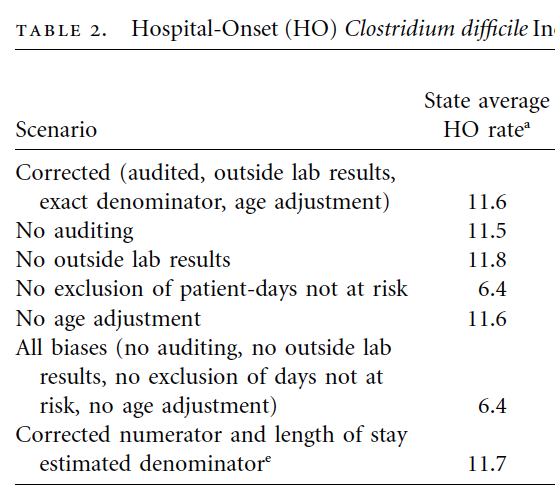 This has several important implications.  One, not removing the patient days not at risk results in reported CDI rates that were much lower than they actually are. This occurs since many if not most patients have stays that are shorter than 4 days.  Second, as the authors state, "HO-CDI rates at hospitals with shorter LOS are biased downward more than the rates at hospitals with longer LOS." It seems to me that this artificially hurts the rates at tertiary-care and academic medical centers more than it would smaller community hospitals. We always hear how academic hospitals are falling behind, but it may have something to do with how rates are calculated, especially if we are including the wrong patient-days in the denominator.  It seems like this would be an easy fix - hospitals could just exclude the first three days from their patient-day calculations.  I hope this happens.
Email Post
Labels: bias CDI Clostridium difficile denominator NHSN numerator rates surveillance