Antimicrobial resistance surveillance systems are critically important for guiding empiric antibiotics, antimicrobial stewardship programs and hopefully therapeutic and prevention research efforts. While it is true that surveillance always seems to show things are getting worse, it's the speed with which things change that is also important. With that in mind there are two recent reports from a national surveillance study that provide important data in regards to the magnitude and trends of resistance and molecular epidemiology among S. aureus and MRSA clinical isolates. (COI alert: both were authored or co-author by Dan)

Both studies used a sample of 4,131 clinical specimens submitted as 100 consecutive isolates from 43 US Centers during the last half of 2011. The first study published in AAC reported MIC distributions of all isolates stratified by MRSA and MSSA. 51% were MRSA. Over 95% of both MRSA and MSSA isolates remained susceptible to ceftaroline, tigecycline, daptomycin, linezolid, vancomycin, tetracycline and TMP-SMX. Thus, both from an empiric and definitive therapy standpoint, we have many treatment options available. Of the 2,093 MRSA isolates, 60 (2.9%) were hVISA positive via either one or both available screening tests and 25 (1.2%) were confirmed as hVISA. This is three times higher than in 2009 when only 0.4% were hVISA. The paper nicely provides details concerning the sensitivity and specificity of the screening tests for those interested.

The authors also reported a significant increase in high-level mupirocin resistance from 2.2% in 2009 to 3.2% in 2011 when all isolates were analyzed and from 2.8% to 4.0% when restricted to MRSA. The authors correctly state that recent trials highlighting the efficacy of universal mupirocin decolonization will only lead to greater selective pressure for these strains and increase their prevalence. This needs to be watched carefully.

In this month's ICHE, the authors published an analysis highlighting the molecular epidemiology of the MRSA stains using the same cohort. 30% were hospital-onset by the 48-hour rule and 64% were PVL positive. USA300 dominated in all strata (source, age, census region) except from lower respiratory tract isolates and in patients greater than 65yo. Of the 173 spa types identified, 51% were t008 and 18% were t002. 48% of all MRSA strains were the composite type (USA300/t008/SCCmec IV). See the figure below comparing it to the next most prevalent composite type (USA100/t002/II), which was found in 11% of isolates. I encourage you to read the entirety of this paper, as the authors discuss the possibility that MDR-clones of USA300 could emerge since it's now firmly established in the healthcare environment. Hopefully Dan will chime in with some comments. My take-away: USA300 = MRSA and MRSA = USA300, at least for now. 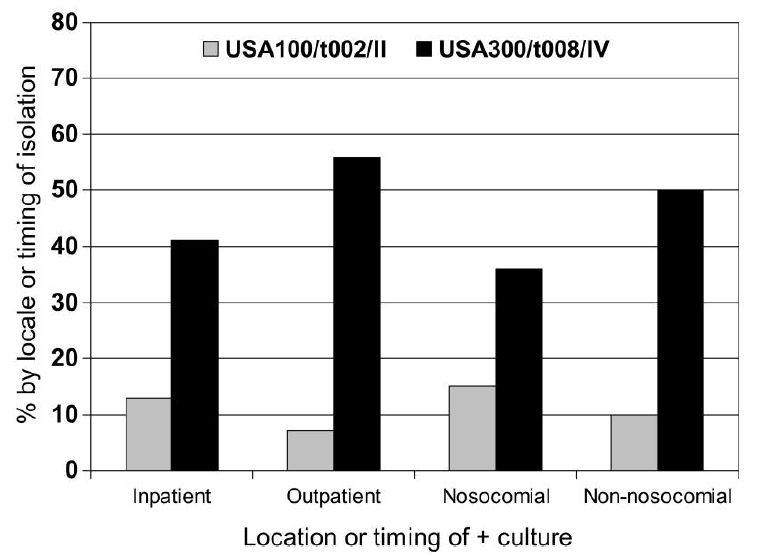