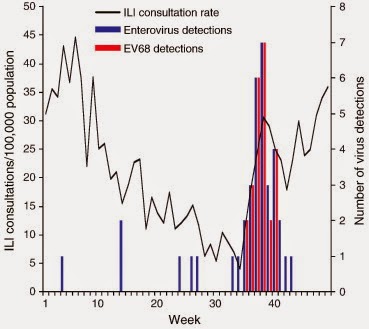 Never a dull moment. Just as facilities have begun wrapping up their Ebola preparation plans, there's gathering evidence that several US states may be facing large clusters of acute respiratory illness associated with human enterovirus 68 (EV68).

Last week the Missouri Department of Health released an Alert describing increased cases in St. Louis and an outbreak of over 300 acute respiratory illnesses in a Kansas City pediatric hospital with 15% requiring ICU care. 19 of 22 specimens sent to the CDC from the Kansas City outbreak were positive for EV68. Many St. Louis cases were positive for enterovirus but specific typing is pending. Denver is seeing severe respiratory illness in very young children and children with asthma. Children's Hospital Colorado has treated 900 children and admitted 86 since August 18th, but so far the specific viral pathogen has not been confirmed. CDC reports similar cases have appeared in at least 10 states -- Missouri, Kansas, Illinois, Kentucky, Iowa, Colorado, Ohio, Oklahoma, North Carolina, and Georgia.

There are a few publications over the last 5 years describing EV68 associated outbreaks including an MMWR covering 2008-2010 clusters and individual reports from the EV68 emergence in the Netherlands, and an Indian Health Services (IHS) outbreak in children (both were already covered in MMWR). The Netherlands has seen the majority of cases in September to November (Figure above) with the highest prevalence in patients ages 50-59, while the IHS outbreak occurred in August-September in children with a median age of 4.8 years.

Clinical Findings: Signs and symptoms include cough, tachypnea, hypoxemia, and wheezing, particularly new-onset. In the Arizona IHS outbreak, at least half of the children had infiltrates on CXR and short hospital stays (median 1.5 days). The clinical presentations of the 18 IHS patients are listed in the table below. 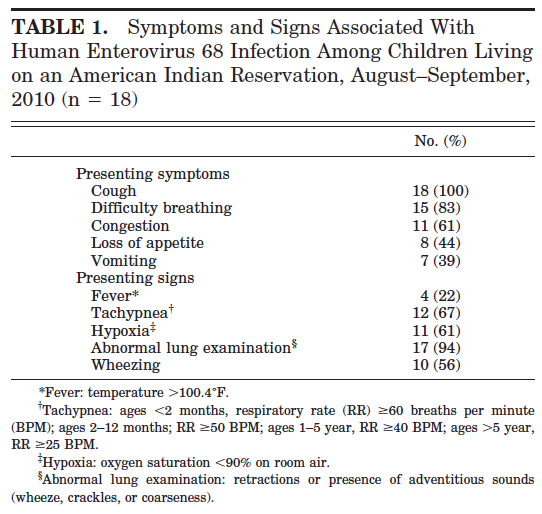 Treatment: There is no specific treatment for EV68. Care is usually supportive and only a minority of patients require brief hospitalization. Currently, there are no vaccines available.

Infection Prevention: The CDC currently (2007) recommends Standard Precautions for enteroviral infections but recommends "Contact Precautions for diapered or incontinent children for duration of illness and to control institutional outbreaks." However, most of the data that informed these recommendations were not derived from respiratory EV68 outbreaks. Recommendations from Hong Kong are very similar.

I contacted a hospital epidemiologist in one of the states experiencing an outbreak, who has graciously shared their current protocol. Currently, they use symptoms to drive precautions so their respiratory patients are placed on droplet plus contact isolation for the duration of their hospitalization. In addition, they started their usual winter respiratory visitation restrictions last week so that children under 13 yo cannot visit and increased their focus on year-round routine screening of all visitors/family members for illness. Finally, they noted that this was the earliest they've ever started respiratory visitation restrictions.